“Valiant Hearts, The Great War” was constructed by Ubisoft in 2014 as a remembrance of 100 years since the beginning of the First World War. The game team received several data from that period, such as letters written by enlisted soldiers or first-hand accounts of the war to create a historically accurate game. The game designers narrate the story of four individuals through the First World War (1914 – 1918). It is a combination between an adventure and puzzle game through which participants solve problems and act in that period. You play as if you are the four different characters of the game and you follow their journey. Players enjoy playing each character for approximately 90 minutes. There is only one singular experience and you cannot replay it in order to win or collect more items. 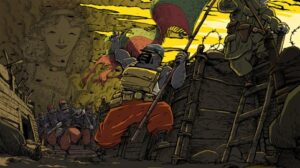 Even if the game has comic-style art and characters, Valiant Hearts deals with some serious subjects, such as soldiers’ reactions the surviving during the war. The game aims to provide different perspectives derived from the four game persons. Karl is a German farmer who lives with a French wife, Marie, and their young son. He gets deported from France to fight for Germany. Emile is Karl’s father-in-law and he takes care of his daughter and his grandson while Karl is at war, but he is drafted to fight for France. Freddie is an American who joins France in the fight against Germany as a revenge towards the death of his wife. Anna is a Belgian student who sets off to the frontlines of war to find her father and she becomes a war nurse. Additionally, there is another character, Walt, the obedient dog who joins each of the characters in the game and it helps the characters. The gameplay seems simple due to the fact that there are puzzles that help you to move or to get things. On the other hand, some part of the games contains battlefields where you have to react as if you were in the war. Each game scene involves narrators’ explanation, information about the historical period and various historical items laying around. 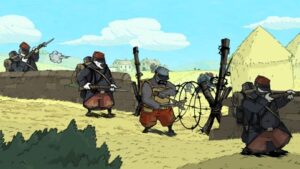 “Valiant Heart” adopts the historical theme of World War I with a critical approach through the presentation of the different perspectives of four personalities. The most interesting thing in this game is that players come in touch not only with personalities on the battlefield but with the societies and they feel and survive during war. The game generates empathy with civilians and soldiers and at the same time emotions to players, such as cruelty and anguish. The game shows the position of all sides of World War I and contextualizes the historical dimension. The game shows as well professional soldiers and civilians who were forced to go to war. On the other hand, people stay at home and find solutions to survive or go to war to learn more about their relatives. There are stereotypes in the game such as the female nurses, but these are not at the stake. The cartoon aesthetic may create several questions about the people of that time and the environment because it seems like a comic rather than real people. The game creators decided to leverage 2D representations so as to be more friendly for gamers and there is no cruelty from that point. As such, the war is represented by a critical stance and there are not the well-known conflicts in this kind of games. Gamers understand the different parties during this war and portray civilian characters and victims. 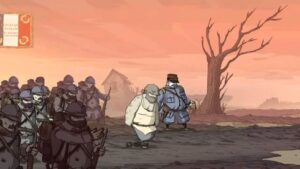 The game can be used by history educators in secondary education due to the fact that the game presents the World War I from comic perspective and there are emotions that students have to handle with their teachers. The good thing is that there are no cruelty scenes that would create negative sentiments to students. The approach of the war is critical, and this helps teachers to discuss the different perspectives and parties of the war. The most important thing is that the game does not emphasize on the idea of the battlefields and this means that students will manage to play and feel like people who experience this war and around it. For sure, students will be able to enhance critical thinking (survival of victims, refugees, families and so on). The cartoon aesthetic portrays the horrors of war less crudely, but teachers should discuss this sort of representation at the beginning and at the end of the game. Students understand through their immersion to the game characters that war, and human suffering is not a game. It is a priority for teachers to have PCs in the schools because it would be easier to use it. Students will not find it difficult playing it as there is a guidance at the beginning of the game and during gameplay and additionally, they must answer specific challenges. Teachers may leverage it so as each student play each character and, in the end,, they will discuss their conclusions. Additionally, teacher may separate students to different teams and each one plays a different character and then they will discuss the different perspectives.

Elias Stouraitis is currently a PhD Candidate in Digital History at the Faculty of Historical Survey, History Didactics and New Technologies, Department of History and Informatics, Ionian University in Greece. He completed his undergraduate studies in History and Archaeology at the University of Athens in Greece and undertook a master’s degree in modern Greek History at the University of Athens. He teaches History and Greek Language at private education in Greece. He has worked as a Research Project Manager regarding Digital Technology in Education, Social Inclusion, History and Culture. He has been awarded a grant from the Japanese Nippon Foundation SYLFF (Sasakawa Young Leaders Fellowship Fund) for his innovative and strategic abilities in research leadership and an award by Common Ground Community ‘The Learner’ for his experienced skills in Education. His main research interests are Digital History, Historical Culture, Digital Games, Design of Educational Software. He is passionate about new Creative Projects and specialized in Digital Tools and Methods.

About the Author: Elias Stouraitis