The month of June is when summer begins to reach the European continent, as we collectively are looking forward to some well-deserved warmth and vacation time. June is also the month that many Pride events take place around Europe. I am writing this book review from the city of Amsterdam, where the Pride celebrations are scheduled to take place in the month of August. No matter where we are located, chances are there will  be events organised by the LGBTQIA+ community  to spread awareness and celebrate diverse sexual orientation and gender identity. The origin of parades –  an essential element of Pride celebrations –  is situated in a history of activism and oppression. The Pride parades in the 1970s in the United States were marches, thus acts of protests in order to demand dignity, equality, and basic human rights for members of the LGBTQIA+ community.

It is worth remembering the political character of the Pride celebrations: the purpose of the parades was to create awareness about the struggles and unfair treatment of nonconforming individuals. Euroclio is organising  a webinar series in the month of June, in part to highlight the absence of gender and sexuality conversations in the history curriculum. 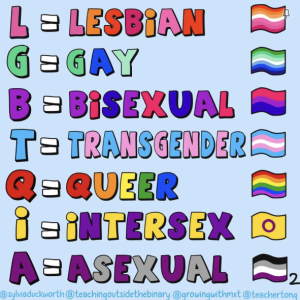 It is the struggle and achievements of those who did not conform to the dominant group in society regarding their sexuality and gender identity  who are highlighted in the book “A Queer History of the United States” by Michael Bronski and adapted for youth by Richie Chevat. I reviewed this book three years after it’s publication date because it fits so well with other initiatives from Euroclio that all aim to give inspiration for teaching Queer history in European classrooms. This book is an adaptation of the original version that was directed towards an older audience. This book is not the only work that has been adapted to a younger audience, with other influential books such as “A Different Mirror: A History of Multicultural America” by Ronald Takaki or “Stamped: Racism, Antiracism and You” by Jason Reynolds and Ibram X. Kendi also modified for younger readers. I love to use these books because it allows you to easily complement the regular curriculum with a variety of other sources, often discussing sensitive or neglected topics.

This also applies to “A Queer History of the United States” as it brings a challenging topic, namely sexuality and gender identity, in a comprehensible manner to secondary school students. The book starts with an explanation of the meaning of words like Gay, Bisexual, Trans, and Queer, hereby also indicating how other words are deemed inappropriate now (such as homosexual). Bronski explains that using the right words are important because words always hold meaning and language is never neutral. Bronski demonstrates this by elaborating on the meaning of ‘normal’, as he discusses the arbitrary meaning that the word holds. The meaning of ‘normality’ is the interpretation of the dominant groups in society for the last thousand years, leading to the discrimination and oppression of those identifying otherwise. This oppression has resulted in an absence of LGBTQIA+ stories in the history of a country and thus at school. History textbooks represent a certain story of a nation,  oftentimes neglecting less powerful voices in society. As discussed in episode four of the Euroclio Podcast “Past times: Teaching and Talking History” onthe role of textbooks in history classrooms,there is a need to complement textbooks with other sources. This is also the goal of Bronski’s book, namely to share the history of the LGBTQ movement with younger generations. This is necessary, according to Bronksi, because “If we are erased from the history books, then how can we ever know who we are? This absence, this erasure, denies us the right and the ability to use our history as a guide to feel pride in the heroism and accomplishments of the LGBTQ people who came before us” (p. XIX)

This book is divided into different chronological sections. The book begins with the colonisation of indigenous lands, then, amongst other topics and eras, the American Civil War, the 1960s, and eventually the 21st century. For each time period, about five to seven people who represent a certain element of the LGBTQIA+ community are introduced. Each of these people have a chapter dedicated to them torepresent a different component of the LGBTQIA+ community. At the end of each chapter, Bronski may state some general assertions on the basis of that person’s story. For example, ‘queer’ was not a word when Deborah Sampson was alive in the 1800s but their gender identity can be described with a modern term like ‘queer’  as they, just like queerness now, challenged the strict gender roles of society. Thus, according to Bronski, labelling the past with contemporary understandings of sexuality and gender can also be a way to honour those experiences of people on the margins of society.

There is a wide variety in the people that Bronksi discusses in the different chapters, which leads to a good representation of the different ways in which people can identify themselves and express their sexuality. Chapter one focuses on the colonisation of the Americas, which explains how indigenous people, like the Pueblo, experienced no constraints in sexuality or ways in which people could express themselves without having to fit into a box of  ‘woman’ or ‘man’. Chapter five discusses passionate friendships between people of the same-sex. These were ‘romantic friendships’ in the 17th, 18th, and 19th centuries. The book mentions several of these ‘romantic friendships’, with chapter five focusing on the relationship between the French Marquis de Lafayette and the first American president George Washington. Several letter exchanges are shown to exhibit the passionate and intense way these two men felt about each other, this element of their relationship is never interpreted as  ‘romantic’ even though it could very well have been. 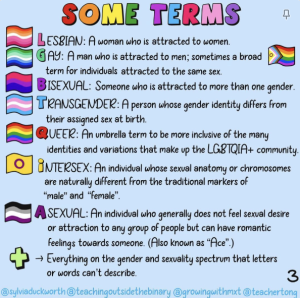 There are also stories that take place in the 20th century, when feminism and other civil rights movements were emerging in the United States. Rita Mea Brown’s story illustrates the struggle for lesbians in the 1970s, as the women’s movement specifically excluded lesbians from their associations. Lesbians in the 1970s were also not welcome in the Gay Liberation Front, since the main organizers were men. As a result of this exclusion, Brown and twenty other women wrote the influential manifesto “The Woman Identified Woman”  arguing that lesbians should be at the centre of any feminist movement because they represent women’s suffering the most. The book also deals with the HIV-AIDS epidemic in the 1980s and 1990s and the legalization of same-sex marriage in the 2000s. A wide variety of people, time periods, topics, and developments are mentioned. In the final chapter, data on sexuality and gender identity among millennials and generation Z is cited, which show that young people identify as LGBTQIA+ more frequently and earlier than prior generations. This demonstrates that topics around sexuality and gender identity are more relevant for young people and this book gives them – in an understandable manner – knowledge about the history of the(ir) movement.

Naturally, the people and events mentioned in the book are all related to the United States of America and not necessarily directly relevant for teaching in Europe. Nevertheless, the introduction of the book provides good theoretical information on the different sexual and gender expressions and introduces the political nature of words like ‘normal’ and ‘natural’. When discussing sensitive topics like this, it is a good idea to create some common understandings of the different terms students are about to interact with. Besides, the book also shows how to connect general themes, such as discrimination or marginalization, to individual stories of people. Furthermore, some people in the book represent topics that we also discuss in European history, like the American Revolution or Abolitionism, and World War II. By reviewing a young people’s adaptation of a book, my aim was to share the existence of such books as they are great resources for history teachers.

This book is currently published in English and can be found on Amazon.nl for €16,26 paperback edition.

About the Author: Maayke De Vries