Skip to content
Home/Resources/“To get vaccinated or not?”: Addressing hot issues of the present through the lens of history

“To get vaccinated or not?”: Addressing hot issues of the present through the lens of history

By Adam DargiewiczPublished On: October 21, 2022

By Andreas Galanos and Theodora Gkeniou

Tackling a hot topic during the COVID-19 pandemic, the probing question for this teaching practice is “should vaccinations be mandatory?”. The practice aims to link history with everyday lives and contemporary issues that directly impact students.

For this teaching practice, Andreas Galanos and Theodora Gkeniou put together a series of resources about the history of plagues and the measures taken by various societies on how they dealt with these phenomena – including the inventions of the first vaccines. The teachers also included some cross-curricular work on ancient history with reference to the founders of medicine.

The questions and topics that students were asked to tackle as historical background included:

Students study Europeana and Historiana resources and define similarities with the COVID-19 pandemic.

Andreas Galanos got the students to write for- and against-arguments and they were able to debate this with each other. This is a rather different approach to the typical curriculum in Greece which primarily asks students to complete essay assignments based on history research done in class. The two teachers ended the lesson with a voting session where students were called to give a vote on mandatory vaccination based on information they found through their own research.

Students study Europeana resources and find out about the history of vaccines, the way people received them and the voices against them.

“Most of the framing came from the issue that a lot of the student opinions were coming from their parents’ views and carried on by the students without any critical thinking. When the students now look at this issue and research it, it is interesting to see their reactions when they are impressed by something similar in history. They are able to see similarities in the rhetoric about vaccinations nowadays, and they are also impressed by how many plagues have occurred throughout the centuries and how all the precautions were so similar, they know this is not a one of a kind phenomenon.” -Andreas Galanos

Both in tackling the COVID vaccinations or when adapting to a different historical context, it will be key to be able to read the classroom. Certain questions might be very controversial and very difficult to deal with and some such topics can be addressed in a classroom and others cannot, depending on the age of the students as well as the relationship the teacher has with the students, time, place, atmosphere, and school culture.

The teachers interviewed pointed to the conversation and debate about LGBTQ+ rights that is taking place in Greece as a topic they could tackle with a similar strategy, including having students research how things are in other countries. At the same time, such a topic may be too difficult for some teachers or in certain classroom settings. They also point to the importance of linking the subject at hand with the curriculum, which could be a challenge in adapting such a strategy to a highly prescriptive educational system.

A key benefit of the practice was that it helped students gain real world experience on how to take part in debates and be active members of a democracy, impairing critical thinking through working with historical sources and linking these to contemporary debates.

The teachers suggest that any “hot issues” can be addressed in a similar way, with the most immediate one being the war in Ukraine: “It is not so common in Greek education but dealing with the war in Ukraine and which side are you on is something that might cause some debate in the classroom. The main thing is to go back to historical resources to decide about the current issue.” 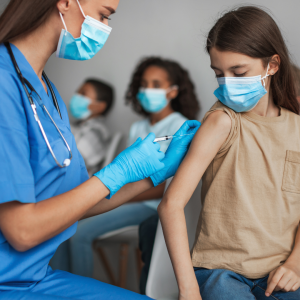 Andreas Galanos is a Greek teacher of language and history in  Thessaloniki. He is also a member of the Europeana User Group.

Theodora Gkeniou is an English and history teacher at the senior high school level. She is also the Europeana Education Ambassador for Greece. Andreas and Theodora have previously collaborated on content and learning materials for Europeana.

Background to the teaching practice

The two teachers involved wanted to prepare a proposal on a topic that is relevant to today’s modern considerations, and what is more contemporary than the issue of whether to get vaccinated or not? It was also a topic directly linked to literacy and misinformation spread by the media, thus they wanted to address a hot issue in the present through the lens of history.

When the school year started, very few students were vaccinated in junior high and they didn’t want to get vaccinated. It was an attempt to get the students to reflect on the topic without directly  telling them to get vaccinated. We wanted the students to actually think for themselves and to use historical knowledge to tackle this topic in hopes that the fake news and conspiracy theories would be analysed more critically. -Andreas Galanos

Prerequisites for this activity:

Format: Digital, blended or in person. Theodora and Andreas implemented the strategy over several lessons in the span of a few weeks.

Further reading: Explore europeana.eu for free to use sources; Historiana.eu source collection on the history of medicine and anatomy.

Written by Evangeline Procopoudis and Andreas Holtberget on the basis of an interview with Andreas Galanos and Theodora Gkeniou conducted by Birgit Göbel and Evangeline Procopoudis  in spring 2022. This was done as part of the collection of teaching practices for the Critical History  project with co-funding of the Erasmus+ Programme of the European Union.