By Adam DargiewiczPublished On: September 21, 2022

This Teaching Practice was created by Dennis Röder

Dennis Röder, M. A., teaches English and History at the „Gymnasium Athenaeum“ in Stade, Northern Germany. He also works in the field of teacher training in Lower Saxony, Germany.

This teaching practice was inspired by a desire to integrate both local and global approaches to the teaching of a topic – World War I – traditionally seen through national or Eurocentric lenses in most textbooks and teaching aids. It focuses on a “forgotten” piece of WWI history, namely that of the nearly 9 million Prisoners of War (PoWs) as well as the role of the International Committee of the Red Cross (ICRC).

The ICRC has a dedicated website on its efforts during WWI. The website can be freely accessed in English and French, https://grandeguerre.icrc.org/

The website contains a well of source material, most notably “index cards” with basic information on individual PoWs, postcards containing pictures of camps in France, Algeria, Morocco, Tunisia, Germany, United Kingdom, British Empire and Italy, as well as accounts from ICRC delegates, letters sent to the ICRC, notices of death and other historical records.

The sources present teachers with several opportunities at highlighting the global and local aspects of WWI history and can complement traditional textbook narratives on the War. Allowing students to work directly with primary sources, the database also presents an appropriate challenge for students to find the required information and analyse, compare and contrast the sources they can find.

In working with these sources, presenting a brief outline of the history of the Red Cross Movement and its global connections will be necessary. The ICRC in itself is often neglected in textbooks on WWI. Founded in 1863, the Red Cross was part of an internationalist pacifist movement originating in Geneva, Switzerland. The pacifist ideas that the movement promoted soon spread to the rest of Europe and beyond, with books published by the organisation becoming international bestsellers. As a result, the ideas of the Red Cross spread to places such as the Ottoman Empire (the Red Crescent) and Japan (where a local chapter was founded in 1879). The major turning point for the ICRC as a global movement was however WWI, when there were nearly 9 million PoWs across the world.

From local to global

With such a large database there is much potential to connect local history – even family histories – with global history through looking at these sources. Exploring the stories of individual PoWs can be an exciting way to showcase the local and global implications of WWI. In sharing his teaching practice, Dennis Röder pointed specifically to the example of a sailor captured near San Francisco in the USA. The sailor in question was from a small village outside of where Dennis himself is teaching, bringing this history closer to the local setting of his students.

The rich source materials from the ICRC present much potential for use in history teaching. Working with the ICRC sources and the forgotten history of the PoWs will allow students to question common national narratives on WWI, including periodization, war theatres, places and people. It also allows for the development of “glocal” historical questions and case studies by looking at the biographies and backgrounds of the PoWs – a case in point being the German soldier from a village near Dennis Röder’s school who was captured in the American Pacific.

The variedness of the sources present a clear use as a tool to contrast with more traditional sources on WWI, commonly found in school textbooks. As such they can prompt questions on, for example, why certain groups are neglected in school books or indeed why the Red Cross itself is often left out of the narrative.

The sources can also be a starting point to discuss and discover some concrete effects of colonialism. For instance, students will discover that among German PoWs you would also find prisoners from Germany’s African colonies, such as Togoland and Cameroon. In the source materials, one can then find reports from delegates arguing for their equal treatment to “regular” German PoWs.

1. Compare and contrast the accounts of prisoners about the daily life in the camp with the reports of ICRC delegates. What was life really like in the camps? In this way students may discover that life in these camps were not always as easy or bright as some of the visual sources might otherwise indicate. Use the index cards to create biographies of specific PoWs. Searching through the ICRC index cards, providing some key data on each prisoner, students can be tasked with drafting a couple of biographies illustrating the local and global connections of WWI. Students can also draw comparisons between the delegate reports and their view on the life of POWs and reports used for national propaganda. 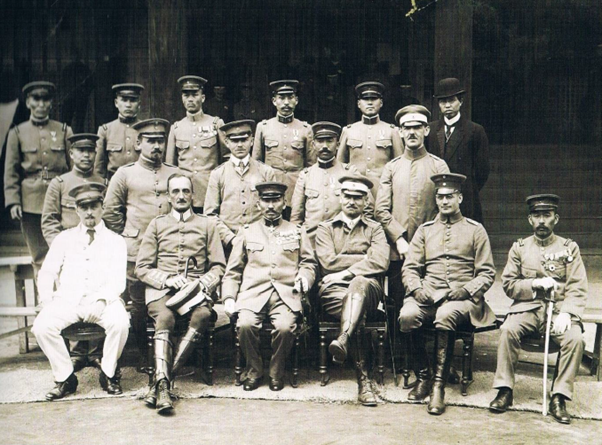 2. Encourage speculation on how and why PoWs ended up in their particular places and situations. Consider for instance the below image from a French camp located in Morocco. The caption reads: “Our delegate in conversation with the German head gardener at the experimental gardens”. Was the PoW perhaps a gardener in his civilian life? Can students find other sources about the camp in question, pointing perhaps to other realities of camp life? 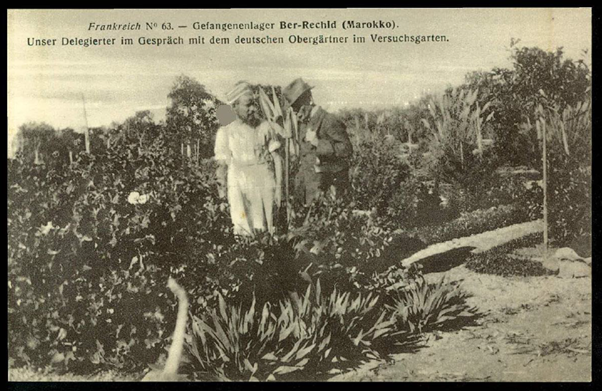 3. A tool to discover the global aspect of WWI. With traditional narratives on WWI often neglecting theatres of war outside of Europe, as well as colonial contributions to the warring armies, the ICRC sources present many opportunities for students to discover the ways in which the Great War affected the wider world. Consider for instance the below source from a Japanese camp, with a list of the German and Austrian prisoners. How did a German soldier end up in a PoW Camp in Japan in 1917? Given the number of soldiers from the colonies, what did it mean to be classified as “French”, “British” or “German” in this context? How were these colonial soldiers treated and how did they experience their time in the PoW Camps? 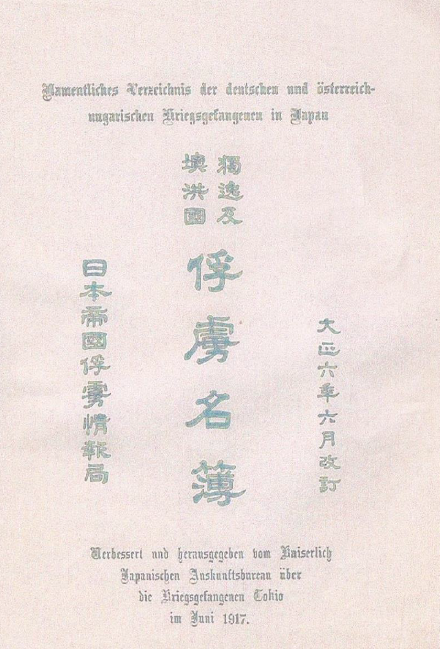 4. Map the camps. The ICRC website contains a map of all the camps where their delegates were sent to report. Students can immediately contrast the map with the maps seen in textbooks. What are the differences? Which areas are included in the ICRC map but not the textbook maps on WWI? Why do we think this is the case?

5. The Nobel Peace Prize. The ICRC won the Nobel Peace Prize in 1917 (the only one handed out during the War) “for the efforts to take care of wounded soldiers and prisoners of war and their families.” A task for students could be to a) draft a speech accepting the prize, highlighting why it was important and deserved, thereby passing historical judgements from the viewpoint of WWI contemporaries and from that of today or b) research if there were other organisations or individuals who were equally deserving of the Prize during WWI.

*This text was written by Andreas Holtberget on the basis of a presentation by Dennis Röder in January 2022. This was conducted as part of the collection of teaching practices for the Critical History project with co-funding of the Erasmus+ Programme of the European Union.