On the 28th and 29th June, EuroClio was invited to join the Evens Foundation in Brussels, Belgium in celebration of their 30th Anniversary and for a special Exchange Meeting with shortlisted candidates for recognition in the education sector. First and foremost, we would like to both congratulate and thank the Evens Foundation for extending the invitation and for their dedication to their mission of living together harmoniously in Europe.

The 30th Anniversary celebration took place with the beautiful Bozar in Brussels as the backdrop. The 28th began with a discussion with the Evens family and board members about the evolution of the foundation and the importance of its continuation now more than ever before. We were honoured to hear from Corinne Evens herself sharing a personal anecdote from her time meeting the late Former First Lady of Poland Maria Kaczynska, where she was gifted a small ceramic angel and thanked for her work at the Evens Foundation. 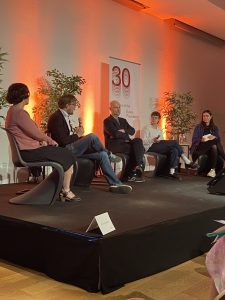 Following this touching conversation, we were joined by Carina Lopes (Digital Future Society), Maciej Nowicku (Helsinki Foundation for Human Rights and WATCH DOCS International Film Festival), Maite de Haan (Founder of Troebel vzw), and our very own Executive Director of EuroClio Steven Stegers, in order to discuss the possibility of a seventh EU value. As an audience member, we were able to exercise our democratic right to vote when discussing the potential seventh values proposed by our speakers.

This amazing discussion session was followed by an equally riveting and engaging session in collaboration with Atelier Leon, who creates meetings and encounters that explore movement and dance as a form of self-expression and connection. This activity brought everyone together and allowed all guests celebrating the Evens Foundation to build a bridge of connection between each other without the use of words. This portion of the celebrations was most definitely a highlight and something that EuroClio is looking forward to implementing in the near future!

The celebration of the Evens Foundation’s 30th Anniversary was also the backdrop to the Evens Prizes Award Ceremony. We were lucky enough to witness the handing out and celebration of awards in four different categories: Education, Journalism, Arts, and Science. It was wonderful to see individuals and organisations across Europe be recognized for all their hard work and dedication to the mission of living together harmoniously in Europe. 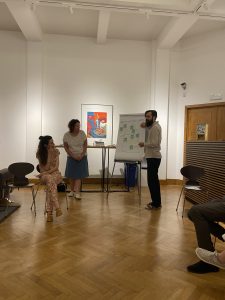 The end of this evening was wrapped up spectacularly with the music from Taraf de Caliu – a band formed of the founding members of Tarah de Haidouks, who are a world famous group that preserves traditional sounds of Southern Romania. We couldn’t have imagined a lovelier way to end the celebrations than to dance the night away to such wonderful and impactful music!

As guests of the Evens Foundation, we were also fortunate enough to join members of the Evens Foundation along with shortlisted candidates for the Evens Prize in the category of Education for a sharing session the following morning. In the sharing session, we not only had the opportunity to learn about the other projects in this category and meet their creators, but were also able to reflect on our individual paths thus far leading us to that moment. It was a great moment of reflection and self-awareness that we got to share with this lovely group of individuals. Once again, we thank the Evens Foundation and everyone in attendance for this wonderful and insightful opportunity to not only celebrate, but to learn from each other!

To learn more about the Evens Foundation and their projects, please click here.