The roles of women changed significantly during WW1. They covered many – and different – new areas, often replacing the men that were at the front. This resulted in a change in the traditional duties attributed to men and women. Visual primary sources could reveal much interesting – and surprising – information about the extent to which women’s place in society had developed during this war. These sources can be used for any lesson focussing on women’s conditions during WW1, looking at elements of change and continuity across the years 1914-1918.

Visual sources can be used to look at the changes in women’s conditions from two different angles. Firstly, by exploring this primary material, students can explore the gradual expansion of the range of different jobs women were engaged in and the more active place that they had in social and civic life. . Secondly, the visual primary sources can also evidence how women’s public perception changed between 1914-1918, portraying them in the new roles they covered during the war.

Women serving in the military

Visual primary sources – mainly photographs and paintings – coming from different countries can show students how women were actively engaged at the front, covering roles that were usually reserved for men. Women served as soldiers in various departments, such as aviation, intelligence, and members of frontline units. As this Russian visual source shows, women also formed the “Battalions of Death” during the Russian Revolution many of whom had become notable figures, such as the British suffragette Emmeline Pankhurst. Women also served as soldiers in various departments like aviation, intelligence, and in frontline units. 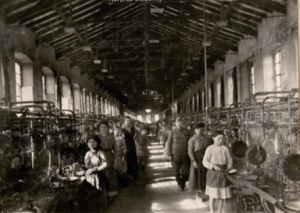 Women also started to be employed as nurses and factory workers more regularly. Even though they had already worked at these places before, the outbreak of the war had led to an increasing need for male workers to be substituted by their female counterparts.. This source from Italy shows how women were employed as workers in a silk mill in the northeast of the country.In addition, women took over very heavy jobs traditionally given to men, like working in brick factories, and worked in the hospital as nurses or volunteering for organisations like the Red Cross.

Women in action: civic responsibilities and struggled for emancipation

Visual sources could show students how women at home were also civically engaged. This British painting from 1918 portrays women queuing for food rationing, highlighting how they were actively involved in food collection while looking after household duties. 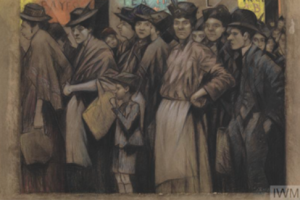 A crowd of civilians queuing for food in the United Kingdom in 1918. Food rationing on sugar and other goods was introduced between late 1917 and mid-1918. Source: Christopher R. W. Nevinson, 1918, Imperial War Museum, IWM ART 840.

The outbreak of WW1 also raised women’s awareness about their civic rights. In different European countries, they began to fight for their right to vote, demanding  more active participation in political life. As this British chalk drawing from 1919 shows, women’s fight for the right to vote was supported by several institutions, such as the Endell Street Military Hospital in London, which employed only female suffragists. Women also claimed their independence and emancipation in everyday life. This British photograph taken in 1918 portrays women from the Army Auxiliary corps bathing in the sea wearing short and modern bath suits. 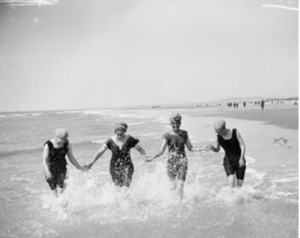 Women’s representation: traditional and progressive views of women in the war propaganda

Visual sources belonging to war propaganda represented women in different ways, showing evidence of change and continuity in the way women were publicly portrayed. For example, breaking with the tradition of depicting women as mothers of future soldiers, this German propaganda photograph portrays a woman as a soldier, showing her in a uniform and smoking a cigarette.

In conclusion, visual sources can be easily integrated in history lessons looking at the role of women during WW1. They can show how women were still assigned to traditional roles, while also taking over new responsibilities. Visual materials can also help students to investigate women’s representations during this period, looking at how their public image was constructed for propaganda purposes.

Interested in knowing more about Gender and Sexuality in History, including visual representation of women, how to talk about gender with your students, and whether we still need feminism?! Join EuroClio’s free webinar series on this theme, from 18 May to 29 June! You are welcome to join even if the webinar series has already begun. More information are available here. 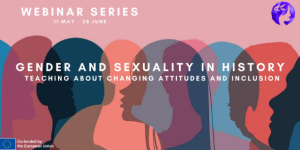 About the Author: Stefania Gargioni