From Constantinople to London

From Constantinople to London

Based on the Webinar Series: Using Historiana to teach history from different angles.

Session 1: “How to use coffee to stimulate great learning of history”
Hosted by Helen Snelson

Around the globe, coffee is a daily, easily accessible and almost omnipresent commodity. You can get it everywhere. For many people, it is an integral component to kick off their day and a trusted solution to keep concentration levels up.

By becoming one of the most popular drinks in the world, the successful bean that is coffee has become part of an immensely rich, diverse and overarching history.

We all know it is a stimulant of both body and mind. In this webinar we also learn how coffee can be a great stimulant to understand the past. Teaching history on a global scale can be hard as there are so many conceptual, geographical and vocabulary challenges for pupils. Using sources of evidence about an everyday product such as coffee can provide an accessible way to learn about how the people of the world have interacted with each other and with what consequences. This webinar explores a variety of sources and considers how we can use them for teaching in-class and online.

This is the first out of four sessions based on content from the Europeana Collections in the eActivity Builder on Historiana. This session of the webinar series “Using Historiana to teach history from different angles” was hosted by Helen Snelson on the 7 of December.

“Worldbuilding”
Helen kicked off the webinar series by addressing a fundamental problem many teachers face: How to help students make a meaningful connection to the oftentimes very abstract construct that is history. The past is remote and unfamiliar, especially so to young people.
To that end, the host first set the technical framework of the session with an introduction to the concept of “world-building” in history education. History lessons can often feel detached from reality and even boring to pupils, since they do not have a cohesive and sound understanding of histories. But, Helen explains, understanding that history is created around evidence-based knowledge that can be challenged by others is crucial and can be used as a valuable tool. History teachers can use this knowledge to “carefully develop and construct a setting for the stories” they are telling. Thus helping students to transform patchy and loose fragments of information into something more coherent and tangible.
Besides really planning out how to create an overall coherent story or “world”, what teachers can concretely do is start their lessons or topics with something relatable like a story of one person’s life or a single, specific object. A specific object like coffee!

Leading students to see the bigger picture with coffee

Helen structured the session along three teaching challenges where teaching history with the example of coffee can be useful.

The first challenge is to help students understand that the world was and is connected. This can be done by piecing together connected bits of information and knowledge progressively. For example, Helen would show her class a map of the world from around 1600 while asking specific questions such as “Why are there areas on the map that are quite detailed and others (like Antarctica) that don’t even exist? What does the map tell us about the knowledge people had of the world in 1600? Where are coffee producing countries and where are coffee consuming countries? How was coffee transported form the “Muslim world” to Western Europe? The goal of this exercise is to build a sense of what the world was like in 1600 by connecting fragments of knowledge that lead to further questions. By introducing this world through coffee, concepts like trade and transport, geographical regions, cultural values and belief systems are introduced and, most importantly, reveal how they connect with each other.
Helen also gives another example of how to build a sense of understanding. She draws a mental picture for her students and invites them to imagine themselves sitting in a coffee house, describing the atmosphere, the other coffee drinkers, the conversations they are having. Where might the coffee they are drinking come from? How did it get to this coffee house? Why might these coffee houses be so popular?

The second challenge is to keep the past complex, meaning that teachers should challenge themselves to convey the complexity and nuances of aspects such as trade and interrelationships. Rather than trying to simplify these intricate concepts, using a simple element like coffee can keep the frame of a lesson manageable while at the same time allowing teachers and students to further venture into “big ideas” and complex historical structures little by little. This could also be done with other products such as sugar, tea or cotton.. 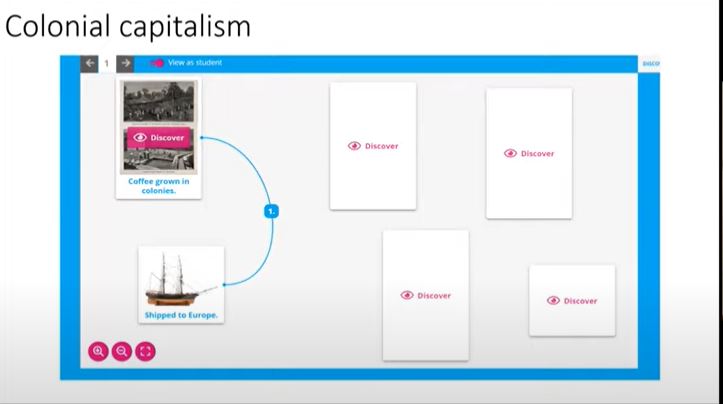 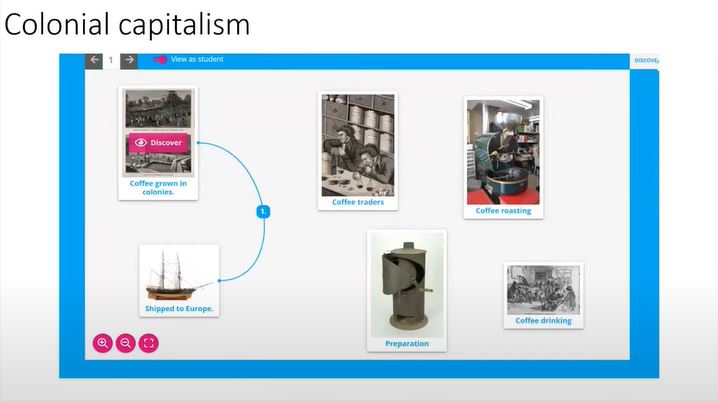 An example of the Historiana e-activity builder. Images are from the Europeana collecton.

For this segment, Helen shows how to use the e-activity on Historiana to explain the different steps of coffee production, transport, and consumption in bite-sized pieces in a history lesson. Helen´s idea here is to “[trace] the bean to the cart and all the people and processes and decisions and implications that are involved in the journey.”

The third and final challenge Helen introduces, is the idea of challenging stereotypes.

Helen explains here that “to build a ‘world’, young people need to have their preconceptions challenged”. Concretely, with the example of coffee, this could be used to explore and ultimately challenge preconceptions about Muslim cultures and societies.

You could ask students to describe what they might see when confronted with an image of people drinking coffee in the 17th century Ottoman Empire. You could then confront them with the culture of coffee drinking in Constantinople, especially the role of women in that culture. Examples like the fact that women´s spaces included coffee drinking (which wasn´t the case in London for instance) and that the right of women to divorce their husbands if they couldn’t provide the family with enough coffee would probably challenge quite a few preconceptions! 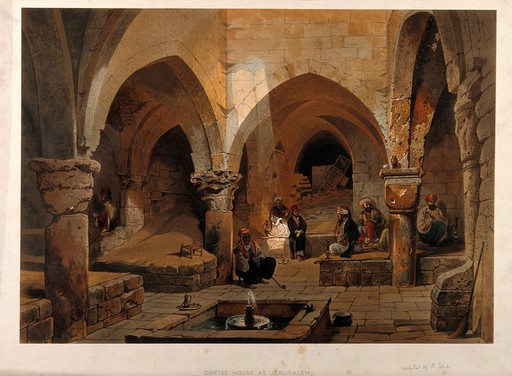 Written by Robin Garganese on the basis of Helen Snelson´s online session. All images used are provided by the Europeana source collection by way of Historiana.

You can find the recorded session of this webinar on our YouTube channel: https://www.youtube.com/watch?v=fIAuMeqQ1W4
Our next instalment of the series is taking place on the 15th of February! Gijs van Gaans will host a session on “Bologna and the rise of Medieval Universities”!
You can register on our website under this link: https://euroclio.eu/event/using-historiana-to-teach-history-from-different-angles-2/
Robin Garganese2022-03-01T10:43:21+01:00February 7, 2022|Categories: Articles, Featured|

About the Author: Robin Garganese