The Nationaal Onderwijsmuseum (Dutch National Education Museum), located in Dordrecht, organized a compelling exhibition on Nazi propaganda targeted to the youth, set to last until the 31st of October 2021. The “Nazipropaganda voor de jeugd, 1933-1945” exhibition gives an insight into the daily lives of children in Nazi Germany, warning the visitors of the dangers of subtle propaganda. For pupils and history educators alike, it offers multiple points of reflection during and beyond the exhibition. The visitor is confronted with visually appealing historical pieces of propaganda that nevertheless evoke a sense of discomfort.

The context of the exhibition

In 2012, the Dutch journalist and professor Gerard Groeneveld (b. 1956) suggested that the Onderwijsmuseum should organize an exhibition featuring his extensive collection of Nazi propaganda material. In 2020, the Netherlands celebrated its 75th year of freedom, and the idea for such an exhibition resurfaced. Groeneveld’s latest book, Hitler’s Youngest Hope, Nazi propaganda for the Youth (Vantilt, 2019), forms the basis of the exhibition.

The curators managed to select varied historical materials from different collections, which are best suited to illustrate the exhibition’s topic. As a history teacher, you might want to challenge your students by asking them to select the best collection for a historical exposition. Check out this Historiana e-Learning activity for inspiration.

A world of propaganda

The indoctrination of German society during the Nazi regime was a multi-level phenomenon that included censorship, propaganda, fear, the promise of a better future and one-dimensional education. It was vital to win the hearts and minds of children who were bombarded by messages of propaganda from a young age.

The visitor immediately notices how colourful and visually appealing some of the displayed items are. However, it is clear that the underlying theme of the displayed items, all targeted at children, is warfare. The aesthetic aspect of the propaganda material is not accidental, as Nazi authorities were aware of the importance of the visual impact, with the aim to seduce children through subtle propaganda. For a history teacher and his classroom, it could be interesting to visit the exhibition and learn about the mechanisms exploited by the Nazi regime to indoctrinate German children. To which extent are they different in today’s context and can similar tactics be seen in contemporary regimes?

The exhibition is organized around three thematic areas: the house, the street and the classroom. If you would like to learn more about this subject,  the unit Silencing Citizens through Censorship, on Historiana, could provide you with historical context to the theme of censorship and propaganda in totalitarian regimes.

As soon as National Socialism came to power in 1933, the propaganda machine started to work, and the Nazification of Germany began. By December 1933, German families were hanging Christmas balls decorated with swastikas on their Christmas trees, and the children received their first Nazi board games, such as the Wehr-Schach (defence chess, featuring symbols of the armed forces, developed later on in 1938). 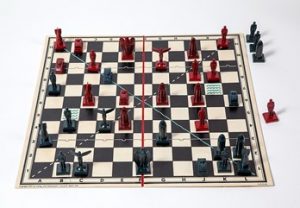 The objects on display communicate a sense of control of the domestic space, invaded by comic books filled with soldiers and war scenes. Nothing was left to chance: even seemingly innocent images of children playing depicted symbols of the regime. On display, there are also several original items from the military equipment of the Nazi youth organizations, such as daggers and medals.

Another interesting object on display is the collection can for the so-called Winterhilfe, or Winter Aid. Children were encouraged to collect money, and in exchange, donors would receive propaganda memorabilia, such as books about Hitler and Heroes of the Wehrmacht.

In the exhibition, visitors can see several photographs, including one depicting soldiers and children marching together. The picture may appear spontaneous, but soldiers were encouraged to pose with children. Once again, it is striking how German children were exposed to military life from a young age.

Swastikas could be found everywhere, on flags, billboards, along with propaganda  posters. In one of the original pictures on display at the Onderwijsmuseum, a young woman is shown posing next to an Anti-Semitic poster. 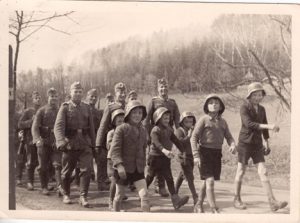 One-dimensional education was a key component of the indoctrination, and the exhibition presents the classroom archetype of the regime. This section is particularly rich in historical material.

The items displayed include school books on German war heroes, such as Manfred von Richthofen, posters depicting a Nazified version of the Sleeping Beauty, antisemitic material, and falsified historical sources. This vast array of educational material could foster a conversation in the classroom around the importance of reliable sources in education. 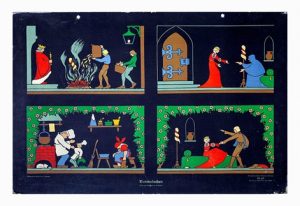 In youth propaganda, Hitler was presented as a friendly father figure. This image, however, was eventually shattered by reality. The last part of the exhibition is devoted to the regime’s aftermath. It was a rude awakening for the nation, as people became aware and were confronted with the horrors hidden behind the Nazi propaganda. Emblematic is the famous photograph of  Hans-Georg Henke, a child soldier, caught in tears and shock in April 1945 by an American war photographer in Huttenberg-Rechtenbach, a village north of Frankfurt am Main.

If you are interested in learning more about the representation of Hitler in propaganda and visual culture, check out this source collection on the Historiana website.

Beyond the exhibition: Beeld en Boodschap

The exhibition continues beyond the Nationaal Onderwijsmuseum, as it is designed to have a larger impact on students through the educational programme Beeld en Boodschap (Image and Message). The workshops are targeted to students in primary education ( primair onderwijs), secondary education (het voortgezet onderwijs) and secondary and higher professional education ( middelbaar en hoger beroepsonderwijs). The workshops are meant to educate students on media literacy and citizenship, with the aid of historical sources of Nazi propaganda.

From a young age, children are exposed to all kinds of imagery. However, they are not often trained to question the (explicit and implicit) meaning and reliability of visual material. The Beeld en Boodschap workshop provides students with the ability to read images critically, for example by distinguishing advertisement from propaganda. The goal is to demonstrate how seemingly innocuous images can hide a propaganda message.

From a history educator’s perspective, the workshop is particularly valuable. Students are learning about one of the most significant events in modern history and are learning how to read visual sources. The workshop promotes historical skills, such as critical thinking and source analyses. 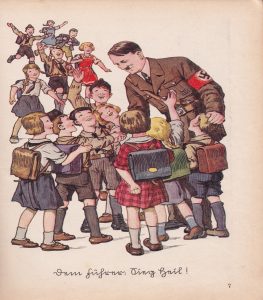 When learning about the totalitarian regimes of the twentieth century, propaganda is one of the main points of discussion. However, students do not often learn about propaganda targeted to the youth, as it is a subject usually absent from the history textbooks. The “Nazipropaganda voor de jeugd, 1933-1945” exhibition could offer history teachers a chance to start a conversation about this topic.

The exhibition is informative, captivating and it presents an insightful overview of an overlooked aspect of Nazism.  Students will feel fascinated by the objects on display, their history, and their meaning. What kind of propaganda messages can they spot in the children’s comic books? What is the overall feeling conveyed by the exhibition? What are the differences and similarities between the textbooks from the Third Reich and their modern counterparts? Many questions may arise upon a visit to the “Nazipropaganda voor de jeugd, 1933-1945” exhibition and all of them are worth answering in the history classroom.

Upon visiting the “Nazipropaganda voor de jeugd, 1933-1945,” you might want to explore further the theme of propaganda with your students. On Historiana, you will find a variety of original quality content focussing on this topic, including learning activities such as How does propaganda work? and Everyday inclusion and exclusion in Nazi society.

“Wehr Schach” from Schulmuseum Collection , Bremen.  Photograph by Jozef Rutte – Wehrschach was a military board game, based on the rules of chess. The German army introduced this board game in 1938. The underlying aim of Wehrschach was to develop tactical and strategic insight in boys.

“Soldiers marching with children” from the Gerard Groeneveld Collection– Soldiers became part of daily street life after 1933. Whenever a military exercise took place on the outskirts of the town or village, German boys would stand on the sideline watching curiously. The soldiers were ordered by higher military authorities to involve them in the exercises, rather than send them away.

“Sleeping beauty tale” from Forschungsstelle Historische Bildmedien Collection, Universität Würzburg – This wall chart from 1936 depicts a Nazified version of the well-known fairy tale of Sleeping Beauty. At first sight, it seems as if the classic story is being told. The prince, however, does not kiss Sleeping Beauty awake, but wakes her up with the Hitler salute: “Sieg Heil!” The manual for this wall chart states that this fairy tale represents the “national powerlessness and national awakening” of the German people.

Written by Giulia Boschini, project management trainee at EuroClio from April 2021. She assists with the development of Historiana, and she is also involved in Europeana’s related projects.

About the Author: Giulia Boschini