Too often history classes only focus on the horrors of the Holocaust and of Nazi rule; there is, however, an increasingly growing iterature that details the ways in which people resisted, helped one another,  and successfully managed to survive.

[su_box title=” ” style=”bubbles” box_color=”#ffffff” title_color=”#000000″ radius=”5″] This book by Freeman is one example that will help educators rethink the ways that they teach this period or supplement what they already do and know. Freeman’s book not only details her family’s history to show how some of her relatives coped with life in France in the 1930s and 1940s, but also to allow students to grapple with the difficult questions about survival in this period when the odds were against Jewish survival. By looking at one family, one can unravel the advantages, limits, and/or shortcomings of different approaches. The book can be superb background for educators, as well as the basis for an interesting Socratic Seminar about the concepts — assimilation, passivity, defiance, and emigration — that she discusses and for students to probe into each of them in detail.  After all it would be great if one could learn from the past, wouldn’t it? [/su_box]

When I was perusing a bookshelf about World War II in a bookstore a few weeks ago, I came across a fascinating book: Hadley Freeman, House of Glass: The Story and Secrets of a Twentieth-Century Jewish Family (London: Fourth Estate, 2020). Since this family has some parallels to my own in terms of an emigration pattern (see Post #1: Planned Escape(s)), I thought that I would share my impressions of it, along with my recommendation of it, here. Freeman, through the use of family memoirs, artifacts, and pictures, interviews with family members, and official documents, was able to put together a riveting account of how her Jewish relatives, that is her grandmother and two of her three grand uncles, managed to survive the horrors of World War II in the United States and in France respectively. It is remarkable how well she is able to document these personal histories and to situate them in time and in historical interpretation. The book – which is part memoir, part history, part commentary, and part family discovery –is a gripping, empathetic account of not only these three people, but also of others who were essential parts of their stories.

Typically, I first read any opening quotation (if there is one), the introduction, and the acknowledgments. And in this case after reading the opening quotation from Arthur Miller (excerpted from Broken Glass, 1994), I was hooked:

‘Getting this hysterical about [anti-Semitism] on the

other side of the world is sane?’

When she talks about it, it’s not on the other side

Of the world, it’s on the next block.’

‘I don’t know what it is! I just get the feeling some-

times that she KNOWS something, something that

that goes half around the world, some truth that other

people are blind to.’

While I have not seen or read this Miller play – which takes place in 1938 – when a Jewish couple in New York reacts to the horrors of the Night of the Broken Glass in Germany, the quotation pulled me into this family story. Of course, given her family’s last name of Glass, Freeman’s use of the quotation intrigued me. Afterwards I skimmed the introduction, and acknowledgements, and I was curious to learn about the Glass family.

Wow, I was not disappointed; I read the book originally in two sittings and just re-read it!! Freeman was able not only to find fascinating details about her grandmother and her great uncles, but also wrote a touching memoir about surviving, coping, and changing. In so doing she argues that these people may represent ” prototypes”, that is different ways of coping and coming to terms with their past. The book is an inspiring journey into uncovering family secrets, unraveling different ways of moving forward (or not, I suppose), and the horrors of experiencing antisemitism in Poland and in France, and yet the importance of staying true to one’s values and beliefs. 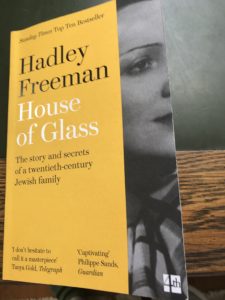 In the book – which had originally started as a memoir of Freeman’s grandmother – one’s learns much more – about Sara (aka Sala) who was able (almost reluctantly) to escape France during the war by moving to the United States and by marrying an American. In June 1937 she started over in New York with a man whom she barely knew; it was apparently her key to survival and yet she returned to France multiple times in the 1930s and ultimately found her niche as wife and mother in New York without losing the French identity that has been so important to her. We also learn about her brother Henri (aka Jehuda) who assimilated well into Parisian culture and along with his wife Sonia, were part of the Resistance, about Alex (aka Sander), who not excelled well into that same culture and also was part of the Resistance, and about Jacques (aka Jakob), who sadly did not survive and was murdered in Auschwitz.

The story begins with Freeman sharing the contents of a shoebox of her grandmother’s memorabilia, which included papers and photos, some of which were indeed puzzling. Together they encouraged Freeman to research and to write about her family. Then with her great uncle’s Alex’s memoir, family letters, official documents and statistics, she was able to write a thought-provoking account of how in the 1920s the Glasses were transformed from the Glahses from Chrzanow, a Polish village, part of the then Austro-Hungarian Empire, as well as their lives beyond this initial emigration. In some ways she writes a typical story of immigration and how some members of the family found this to be easier than others and yet her careful prose shows the complexities that were involved in these decisions and changes.

Her careful use of these various sources gives life to these both “ordinary and extraordinary” people. One may argue with her “one word” characterizations of individuals as “passive” for her grand uncle Jacques, “defiant” for her grand uncle Alex, “assimilated” for her grand uncle Henri, and “emigrant” for her grandmother. Still they mirror sociological descriptions of different ways in which people respond to crises and relate to an extensive literature of migration stories. There may be truth to these characterizations, which helps us understand how people are influenced by their personal assumptions and niches. Not only does Freeman write about how these three siblings survived the war, but she is also able to share their intertwining stories in the years after the war – from the “ordinary and the “extraordinary” as puts it … Henri and Sara in the first category and Alex in the second – and in so doing share fascinating insights into gender, migration, and much more. These three siblings are able to continue their lives – family, children, work, travel – and in Freeman’s account we learn how these stories are connected to one another.

In different ways the three survivors assimilated into their respective culture(s) and societies; they managed to live normal lives as best as they could, which suggest that there may be lessons for the present and future from the way in which people respond to the past. Starting over is not uncomplicated – as I know from my own family history and my life – and yet Freeman shows with detail and empathy how her grandmother and her grand uncles managed to do so. She provides a nuanced and empathetic portrayal of how they all managed to survive. The book raises essential questions for all of us to ponder about the complexities relating to assimilation, starting over, Jewish identities, gender roles, unjust governments, and assumptions during a challenging period of history — the world of World War II and its aftermath in the United States and in France. I highly recommend this book to anyone interested in these questions.

This book review was originally published on James Diskant’s blog: “Chronicles from Berlin: Anecdotes About Starting Over, Coming Out, and History Teaching”, where, among other things, Dr. James Diskant also provides reflections on lessons from many years as an educator in history education.

About the Author: James Diskant