[su_box title=” ” style=”bubbles” box_color=”#ffffff” title_color=”#000000″ radius=”5″] Nella Larsen’s ‘Passing’ was first published in 1929. The title refers to the practice of “racial passing” which meant crossing the colour line between blacks and whites: the attempt to claim recognition in a different racial group than the one people belonged to was a quite common practice in the US of the 1920s. [/su_box]

The novel belongs to the heyday of the African American literature in the 1920s: after the disillusionment of World War I and in a milieu of racial segregation, the black community stood out and developed its art through the motif of “Négritude”. Intellectuals of the New Negro Movement claimed their roots and did their best to represent their ethnicity: what followed is what is known as the Harlem Renaissance, which gave voice to a new African American consciousness. Passing reflects upon African Americans’ crisis of identity in a white environment and their need to retrieve their ethnicity, but at the same time it also calls into question the very notion of race, which is represented more as something ambiguous rather than a defining feature. It depicts the complicated intersection of race, gender and social class, and the clashes between personal freedom and social obligations.

The reading of the novel begins with its epigraph. Before diving into a story, the reader is confronted with a short poem. Passing’s epigraph is an original paratextual element and it is an allographic epigraph as it was written by Countée Cullen, one of the most representative authors of the Harlem Renaissance. The short poem introduces the theme of Africa, the meaning of roots and ethnicity: the speaker asks himself “What is Africa to me?”, a question which guides the poem and its ongoing reflections. The original, full-length poem is part of a collection, Color, published in 1925. The decision of omitting the original title of the poem, Heritage, hints at an understanding of the act passing as a loss rather than a gain, in particular the loss of heritage – the title of which the poem appearing in Passing is deprived of.

The story is set in the Harlem neighbourhood of New York City. The plot revolves around two African American women who see each other again after a long time. Irene Redfield is the mother of two sons and the wife of a black husband: as he is too dark to pass, she occasionally passes as white when she is alone. She is passing as white when she meets her old friend Clare Kendry: the two women pretended to be white to enter a Chicago hotel and enjoy the sunny day on its rooftop. Clare immediately recognises her friend and her ethnicity, but Irene cannot the same. From the novel’s opening, race is slippery and terribly unstable.

Irene learns that Clare is currently living her life mostly as a white person and that she is married to a rich, white husband who is unaware of her racial roots. Irene would like to avoid further engagement with Clare, but she is too intrigued by her: eventually, the two women dangerously resume their childhood friendship.

Despite being a novel, the narrative is built as in a theatrical piece, where chapters can be understood as different acts and characters constantly perform a role and act as actors of comic yet dangerous scenes – until Clare Kendry dies, leaning backward in a window, in the final act. Whether she fell accidentally, committed suicide or was pushed by Irene or someone else, is up to the reader’s imagination and interpretation.

And so is the question of whether the theatrical piece is a tragedy or a farce.

Crossing the colour line: a tool of convenience?

Why would an African American pass as white? Making a political statement? Defying white supremacy? Or more simply, gaining a better social position?

People were undeniably passing as white in order to obtain something better, something that they would never get by ‘staying black’: crossing the colour line meant being eligible for a well paying job, living in a fancier neighbourhood, being allowed in whites-only environments, enjoying a multitude of privileges.

The character of Clare Kendry embodies a different perspective on the practice of crossing racial boundaries. In the novel, passing is framed through Clare’s sense of playfulness. Her life is a theatrical piece and she is the protagonist on the stage, performing whatever identity she needs or wants to perform. Whilst Irene comes to wish she had not been born black, Clare does not take race seriously: she doesn’t feel burdened by the yoke of race as Irene does. Clare plays with her own identity and laughs at danger.

After her father’s death, his bigot aunts treated Clare like a servant and forbade her from seeing or even talking about ‘Negroes’ – this is how African Americans are referred to in the novel. She was consequently also forbidden from revealing the truth about her race. But what is the truth about her race? Throughout the novel, Irene’s black perspective reminds the reader of how white Clare is. When she says that she desperately wants to see Negroes and be with them again, she is somehow acknowledging her belonging to another world – and she sounds irremediably white. She does not want to socialize with blacks because of racial belonging and solidarity, rather for the sake of excitement. Clare did not hate being black, nor she hated being white. On the contrary, she loved being both.

Passing was generally perceived as the required practice to gain opportunities for personal advancement, and it was consequently often dramatized as a mere class question. Larsen frees herself from the conventions around the theme of passing and its sole interconnectedness with climbing social classes. Passing is a tool of convenience, but for Clare it is not merely driven by material ambition. The term ‘passing’ itself usually refers to passing for white, whilst it is never used to mean ‘passing for black’: Clare is the one character that enables this shift in meaning, as she rather dreams of inhabiting different social classes at the same time and she is not concerned about moral implications. Moreover, here the focus is not on how the person passing is perceived by whites, but on how he or she is perceived by blacks.

The novel revels in this ambiguity and does not clearly take a position: passing is a symbol of gain and loss at the same time – gaining respectability but also losing any bound with your ethnicity. The character of Clare suggests that race is something that can be manipulated and also acquired: the narrative ultimately perceives race not as a matter of identity but of performativity. By questioning the meaning of belonging and the idea of loyalty to a race, the narrative raises a problem of representation but more than anything disrupts the conventional way of thinking of them.

The theme of passing was a very recurring topic in American popular literature since the mid-19th century. Most of the fiction available was written by white men and told the story of an unfortunate black girl born from a tragic event. This girl was usually compelled to pretend to be white for her entire life; an aristocrat would fall in love with her beauty and marry her unaware of her racial status, but he would eventually find out or the girl would just confess. In the end, the girl usually dies of fever – but also of deep internal suffering, discomfort and social uneasiness. This regular path of the novel contributed to the creation of the leitmotif of what is known as the “tragic mulatta figure”, a stock character in early African American literature. These types of accounts highlighted the feeling of social exclusion of the ‘Negro girls’, as this exhaustion would be the main reason for depression and suicide.

Nella Larsen’s novel portrays passing as a choice, and not as a constriction. Furthermore, the act of passing is neither condemned nor praised. There is no real judgement: the reader is enabled to make his/her own statement. This is reinforced by the unexplained death of Clare: it is the reader’s duty to make sense of what he has read and understand the conclusion of the novel as an act of crime, fate or suicide.

Clare Kendry’s character does not correspond to the tragic mulatto figure: she is a provocateur and a manipulator. Ultimately, she is a performer. Passing successfully for her means having no restraints. She is never hiding, but “stepping always on the edge of danger” (Larsen, 1). Does her race doom her to an already written fate?

The theatrical piece might have the form of a tragedy, but turns out to be a farce. Clare is not scared and does not demand pity, her death is not the consequence of her fear. Clare dies because fatalism must be at the core of Larsen’s work: the author acknowledges the literary tradition and yet breaks the boundaries, canons and limits. On the surface, the novel seems to conform to the stereotype of the mulatta figure. Nevertheless, the narrative resists the conventions of the genre and gives innovative treatment to a very worn racial subject.

How does the novel help decolonise history and why should it be included in history education?

The novel can be used in history education to teach the history of African Americans and to tackle the issues of race, social boundaries and belonging. More specifically, the novel deeply engages with the question: “where does race reside?” and suggests different plausible yet equally incomplete answers – blood, emotion, ancestry. The concept of race is ultimately understood as a function of science as much as of law and politics. It is primarily a function of history and as such, it has been subject to Western biases.

The novel should be included in the curriculum as

From fictional characters to historical accounts

Passing is a work of fiction, but it is also the telling of a world that truly existed, the world where its author lived. The fact that Nella Larsen has a lot in common with the character of Clare comes as no surprise. Larsen’s parents were Danish immigrants- her father specifically originated from the Danish West Indies and died when she was young. Her mother remarried, but her new family members disregarded her heritage and the ties that bound them. Furthermore, Larsen grew up in the vice district of Chicago, where there were very rigid boundaries between blacks and whites.

For history educators who are interested in using the author’s life story, more information about Nella Larsen can be found here.

Specifications about the book:

Wertheim, Bonnie. Nella Larsen – A Harlem Renaissance-era writer whose heritage informed her modernist take on the topic of race. The New York Times. 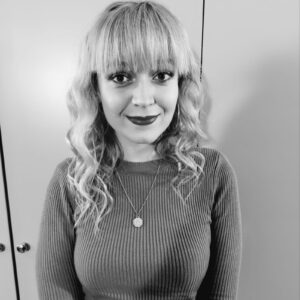 [su_box title=” ” style=”bubbles” box_color=”#ffffff” title_color=”#000000″ radius=”5″] Giulia Verdini is a trainee at EuroClio from February 2021 and she is working at the Secretariat on outreach and project management for Football Makes History, In Europe Schools, Contested Histories and Historiana. Giulia holds a BA in Western and Eastern Languages and Cultures from the University of Macerata and a MA in English Literature from Uppsala University, where she graduated focussing on questions of representation and specifically addressing the derangements of scales and the ethical challenges that the advent of the Anthropocene and globalization have unmasked. She previously interned as a teacher in Sweden and she is currently doing a Master in Global Marketing and Communication. [/su_box]