Red Dead Redemption II (Rockstar games – 2018) is a one of a kind western game where you can discover a variety of landscapes of America in the year 1899 on the back of a horse. Halfway through the story you can make one of the most wonderful rides possible in a game. Starting at the east coast of a fictional America, you ride inland on a horse with no name, heading home, crossing different kinds of landscapes. You cross little industrial towns and big empty plains, and ride on wooden paths through the swamps, along endless railroads and through the foothills of the mighty mountains in the north. This decor is one of the main characters in the story of Arthur Morgan, key figure in Red Dead Redemption II (RDR2). This moment in time symbolizes the closure of the era of the Wild West. There is no more frontier and every corner of this new continent is mapped. You can clearly feel the transformation from the age of the lawless into the incorporated industrial States. Arthur Morgan, as an outlaw and member of the Van der Linde gang, is one of the last in his profession. As a player, you have to deal with the disadvantages of being a gunslinger at the dawn of modern times. 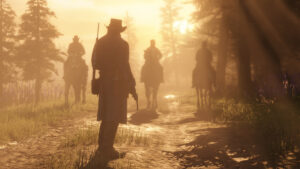 The creators of RDR2 designed a landscape as a parallel universe of the United States at the end of the nineteenth century, but implemented countless analogies with the real geography and history. There are, for example, references to the Philippine–American War, the ruins of the Civil War, the gold fever, the difficulties surrounding the Indian reservations and the German migration wave (the most famous family within this wave has to be the Trump family). Therefore, the game has two strong assets: a rich narrative and a gorgeous decor. The latter is certainly interesting for the use in the classroom. 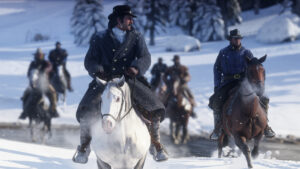 The game has a relatively large map that is roughly comparable to different regions in the United States. The story of Morgan starts in the north, where the snowy mountain ranges lie and you can encounter a wandering pack of wolves or a grizzly bear. If you descend to the south later in the game, you end up on the large steppes where long railway lines cross and bison herds roam. Visit the south of the map that looks like Louisiana and go into the bayou for a crocodile hunt. In the east lies the large harbour city Saint-Denis which is comparable to a mixture of New Orleans and New York around the turn of the century. You can spot trams and visit barbers, factories, dinner shows, saloons, restaurants and Parisian flower gardens. You will also notice the French influence throughout the city. Saint-Denis is an interesting contrast to the wide-open plains and valleys where you can wander about. 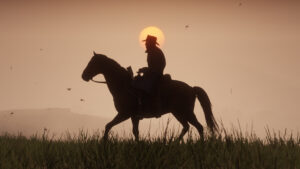 RDR2 is an open world game (or sandbox game) in which you can step out of the main storyline of Morgan and his gang at all times and explore the area on your own. This aspect is an added value for using the game in the classroom. For example, you can give the students a comparison task in which they have to investigate different elements of daily life anno 1899. After all, a lot of European history curricula deal with subjects like modern imperialism, industrialisation and the associated social consequences, plantations, migrations, and so on. Just make sure that the students can move freely through the game and make decisions of their own. You can also use the game as a kick starter for a discussion about games as secondary sources.

The other aspect for which the game is praised, is the rich narrative of the main character gunslinger Arthur Morgan and his position in a gang of outlaws. Despite the lively storyline, this aspect is less suitable to play with your students. It is, after all, a story of violence and multiple confrontations with other gangs, bounty hunters and the Pinkerton National Detective Agency – none of which are resolved peacefully. The Pinkertons still exists as a private detective agency and were originally founded in the mid-nineteenth century as a response to the large number of gangs at the Midwest frontier. They had to track down these itinerant gangs that were guilty of train, postal and bank robberies in these widespread areas. 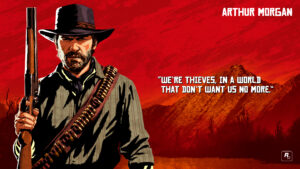 Occasional episodes based on historical facts occur during the story of Arthur Morgan. With a well-chosen selection of chapters, you should be able to play these episodes with your students and relate them to elements of American history or explore the game’s historicity together. Examples of these historical facts during the game are the encounters with the Suffragettes, a group of women fighting for equal rights, and the chapter in which Morgan is part of a slave revolution on a Caribbean island. This refers to the Haitian Revolution (1791-1804) and is a nice intermezzo during the game that mostly takes place in The States.

Red Dead Redemption II is a game for PC, Playstation and Xbox and a wonderful window to the geography and history of the United States at the end of the nineteenth century. As it is an open world game, I advise you to wonder around with your students and experience the last days of the Wild West and the dawn of the United States in modern times.

Daan van Leeuwen is a teacher educator at the InHolland University of Applied Sciences Rotterdam (The Netherlands), teacher, historian and editor at Kleio, the magazine of the Dutch association of history teachers. He has written several articles on the use of games in the classroom.

About the Author: Anna Ivanova