New meaningful ways to remember? An approach from the Museum Klok & Peel

New meaningful ways to remember? An approach from the Museum Klok & Peel

As part of the commemoration and celebration of the 75th year of freedom of the Netherlands, several events have been organised throughout the country to focus on WWII remembrance. The region of Brabant, through Erfgoed Brabant organised a conference entitled Past: Forward aimed at bringing together young professionals and academics dealing with remembrance. Three main topics were at stake: Reflect, Rethink and Remember.

The Remember section covered various topics such as the role of sound in memory, the consequences of different narratives in politics, and a best practice on educating children about the Second World War was shared.

The Museum Klok & Peel presented on their education programme in collaboration with schools from the region. As part of the bigger “Death Valley De Peel”, several initiatives are  ongoing such as “Theatertocht Death Valley De Peel” or “Girls from before”.

The Death Valley De Peel project includes several activities aimed at different age groups. One of these, entitled “The youth of today” deals directly with the commemoration of WWII, and raises an important question: How to involve youngsters that have no direct experience with War? While the importance of the second World War is strongly emphasised in school, it is often difficult for children to relate to the people and stories they are taught about.

The Museum Klok & Peel has developed an activity to bridge that gap by putting children in contact with people with stories about The Peel. The Peelraamstelling was the second defence line of the Netherlands, just behind the Maas line. It was built in 1939 and attacked and conquered on 10 May 1940 by the German forces. The Peel has been the theatre of many tragedies and has witnessed both the invading efforts of the Axis and those of the parachuted Allies. To preserve this heritage, the museum helps children find a survivor with a story to tell about the valley. The children interview that person, reformulate the events shared in their own words, and produce a drawing about the story (see pictures for examples of the drawings). By not only reformulating, but also visualising the events, the children have a better understanding and can better relate to what happened.

Two pupils were present at the conference to share their experience. While one presented her summary of events, the other shared some reflections and thoughts on the process. It was striking to hear the emotion in the voice of the young girl who read her reformulated interview. “Martien says: if it had been quiet in the hospital I would not have had a leg anymore.”1

The second young girl who was reflecting on her experience mentioned that: “Interviewing someone who has gone through a hard time needs to be done with great care. While asking your questions you had to not only think about your school assignment but also be aware of their emotions that could come back, that they perhaps had tried to suppress. Some things are better left untouched and were not spoken of during the interview.”Interestingly, and despite the sensitivity of the topic, the “man and woman we interviewed opened up about their experiences and were happy to help us and some were even relieved that children our age would even show interest in the war”.

Projects like these help the generations that have not witnessed war directly. Further than the knowledge of events, young people are given ways to relate to the emotions and experience of those who witnessed the war. Such insights enrich and transform the outlook of these students not only on the Second World War, but on other conflicts. As they put it: “the most important thing is that we should all remember what happened in the past and give a message to the next generation; Together we must prevent another war and make sure that this can never happen again”.

EuroClio is also working to innovate on education and remembrance practices, for instance through the RETHINK project, by sparking the interest of young people and thus ensuring a continuity of the lessons learned from the past. For a generation that increasingly knows online interactions, human contact and wisdom are exceedingly valuable.

1 – The quote refers to a story wherein a child had a shard lodged in his leg following an attack, and was transported to the hospital. His leg was to be amputated. However, since he was not the most critical case in that hospital, the amputating was delayed to the next day. Miraculously, the leg recovered better than expected and need not be amputated anymore. 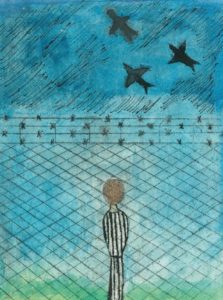 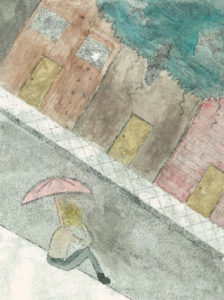 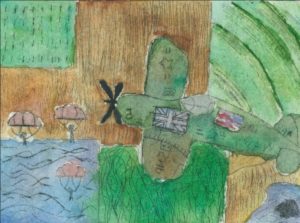 About the Author: Lorraine Besnier