Third training in Finland: making the EU an interesting topic for students

Third training in Finland: making the EU an interesting topic for students 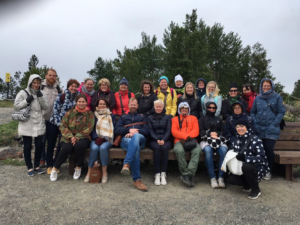 As part of the Decisions and Dilemmas 3: making learning about the EU motivating and meaningful project, the third national training event was held on 5-6 June 2018, in Kallio upper secondary school in Helsinki. The training is based on the translated materials from the Historiana Changing Europe unit. In this event, 32 Finnish history teachers took part, and an international trainer from the Czech Republic, Jiří Beneš, was present as well.

The meeting kicked off with a lecture called “Populism, nationalism and the future of Europe” by Dr. Emilia Palonen from the University of Helsinki. This lecture was followed by a presentation of national trainer Kati Hynönen which treated the topic of Historiana webpages and the project itself, Decisions and Dilemmas III. The overall goal of the project is to make learning about the EU interesting for students while simultaneously conveying more information about the motives and reasons behind political, economic and social initiatives that led to the founding of the EU. This is done by giving students insight in dealing with current issues. Kati Hynönen also presented the results of the Teaching Europe research, which focused on the way the EU is taught in the participating countries by analyzing school textbooks.

The workshop sessions that followed, consisted of two parallel workshops, namely “Subvertising as a pedagogical tool” held by Eeva Kemppainen, and “Rising from the Ruins” by Kati Hynönen.

“Rising from the Ruins” showcased the situation in post-war Europe and the events that initiated the start of European integration. In order to better understand the unit, the participants took part in several activities, such as studying character cards and taking part in the drama. The play allowed the participants to role-play as various historical figures, like George Marshall and Joseph Stalin. Subsequently, an analysis of the workshop allowed for the participants to share their thoughts about the material and its applicability in their own classrooms. The Finnish history and social studies teachers were extremely excited about the material.

The first day concluded with a field trip to windy Vallisaari island on the Helsinki archipelago, followed by a dinner in the center of Helsinki. Vallisaari island has been in military use and has been open to public only for two years. Fortifications, buildings and a record-breaking range of different species tell a tale of coexistence between humans and wild nature. The second day of the event started with a lecture on meaningful reading, held by Dr. Sara Routarinne from the University of Turku.

This day’s first workshops were held by international trainer Jiří Beneš and Dr. Najat Ouakrim-Soivio from the University of Helsinki. Dr. Najat Ouakrim-Soivio gave a workshop on evaluating the skills in history. Beneš presented the material “Opening Europe’s borders: border controls in a (post-)Schengen world. How did the migrant crisis shake the foundations and principles of the European Union?” With this material, students will consider to what extent the Schengen agreement functions and how much freedom of movement there is within the EU. They will discuss how the EU is dealing with the migrant crisis and how this crisis has influenced the ‘shaking’ of the EU’s foundations. They will also reflect on questions such as whether the migrant crisis is a problem for the entire EU, or only for those countries on route. Moreover, students will look at what is required for someone from outside the Schengen circle in order to get the Schengen Visa.

In the final two workshops, Mr. Tomi Rytkönen talked about the program called “Junior Achievement Finland,” and national trainer Kati Hynönen presented the material “The challenge of European stability”. By using this material, students will learn about the ups and downs of European stability from 1945 until today, and learn how Europeans have responded to the challenge of maintaining stability. Overall, the participants of this two-day event were positive about the program and considered the workshops very meaningful.

The national training event was organized in cooperation with The Association for Teachers of History and Social Studies in Finland. The text and pictures are from the report written by Kirsi Ruhanen.