Reconciliation through dialogue in a shared past

From 17-21 February this year a training of future trainers as a part of the project “Historija, Istorija, Povijest (HIP) – Lessons for Today” (2015 – 2017) was organised in Zagreb. The project, which is funded by the European Commission, intends to raise attention and encourage discussion about the events of the recent past of the Western Balkans, which are the cause of various divisions and generating conflicts in the last century. Fifty future trainers from Slovenia, Croatia, Bosnia and Herzegovina, Serbia and Macedonia took part in multiple lectures and workshops. The objectives of the project HIP are to research and launch discussions on Former Yugoslavia, to promote critical thinking and to encourage creative thinking about how to educate the common past and promote tolerance. By promoting critical thinking about the events of history and their importance in modern time and events, the Anne Frank House and partners aim to achieve reconciliation through dialogue in a shared past. The methodological approach that will be used includes a combination of formal and informal education and through this interdisciplinary, pluralistic education History submitted by teachers and students. A key element in the project is the creation of long-lasting, high-quality, interactive educational materials on history that will inspire future generations of teachers and students. The Croatian Education and Development Network for the Evolution of Communication (HERMES) is one of the partners in the project and Igor Jovanović had the chance to give a presentation about EuroClio as an association and its work. He highlighted the EuroClio’s textbook “Once Upon a Time… We Lived Together” created during the “History That Connects” project. You can find the publication on our website as well.  Other partners are the Anne Frank House (the Netherlands), Youth Initiative for Human Rights (Bosnia and Herzegovina), Youth Educational Forum (Macedonia), Humanity in Action (Bosnia and Herzegovina) and Open Communication. 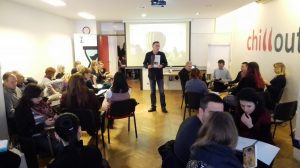 Speakers and workshop leaders at the seminar were: Tvrtko Pater – Introduction to the traveling exhibition Anne Frank – A History for the Present and an Introduction to Memory Walk methodology), Almir Alić – Lecture on the International Criminal Tribunal for the former Yugoslavia, Miljenko Hajdarović – Time line of Yugoslavia, Jelena Došlov – Study of Totalitarianism, Vesna Ivezić – Football Arena as the site of expression of nationalism, Bojan Golubović – When you say URBAN do you have any prejudice?, Ida Ljubić – Brotherhood and unity at the table? Yugoslav cookbooks and cooking textbooks, Branislav Toder – Social crisis and the defeat of Yugoslavia – breaking of the common state, Smilja Mrdja – Multiperspectivity in the processing of sensitive content in the teaching of history in the case of Goli Otok, Igor Jovanović – Presentation of EuroClio Association, Tihana Magaš – Presentation of the project “Traces of the past at the door of the present “, presented the materials to teach developed during the project – “Cards for teaching: “Timeline of Yugoslavia” and introduced a manual with 8 curricula (International Criminal Court, Timeline of Yugoslavia, Nationalism and football, Brotherhood and Unity at the table, Study of totalitarianism, Urban=without prejudice?, Social crisis and the defeat of Yugoslavia, Goli otok).