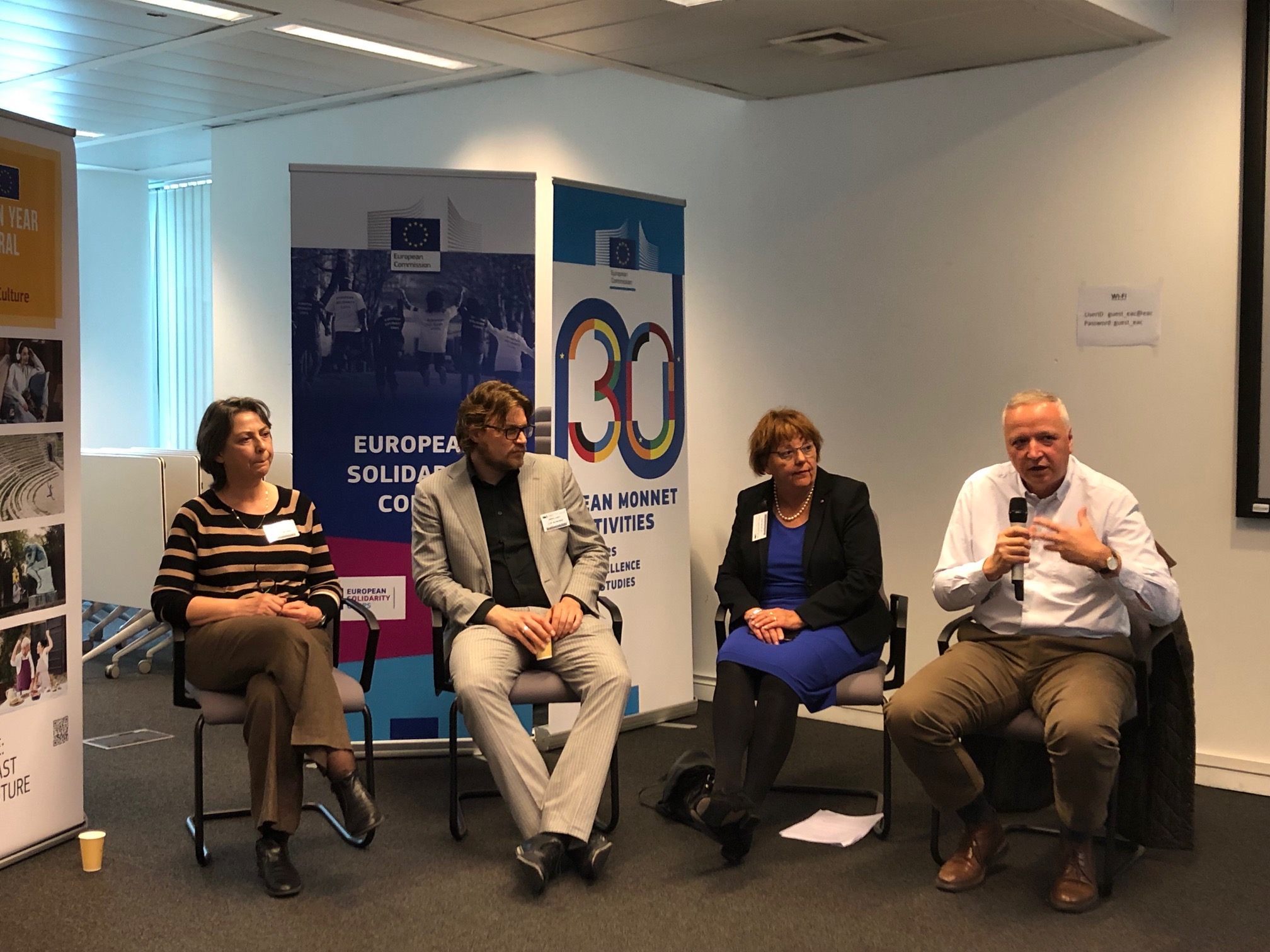 The agenda for the Workshop Meeting had a double focus, it addressed the use and abuses of modern media and building bridges through inclusive history education, both of which were also talked about during the Peer Learning Activity in Croatia in April 2019. Two draft Thematic Fiches were developed, the one on history education written by Joke van der Leeuw-Roord. The Fiches were furthered during this meeting. One day was hosted at the House of European History in order to explore how this museum contributes to inclusively bridging European History.

Overview of the PLA in Croatia

Joke van der Leeuw-Roord from EuroClio/Lifelong Learning Platform and Mirjana Miknic from the Ministry of Education in Croatia presented the highlights from the PLA in Croatia, which took place in Zagreb on 4-5 April 2019.

Joke van der Leeuw-Roord presented the focus of the PLA on building bridges through history education. She explained that Markus Prutsch (European Parliament) presented challenges associated with European historical memory and identity, and acknowledged the central role of high-quality history and citizenship teaching and teachers. Neven Budak (University of Zagreb) presented the challenging curriculum development in Croatia, and stressed the importance of civil society organisations in this process. A panel discussion focused in particular on local experiences in Balkans including the complexities of history teaching in Bosnia-Herzegovina by Melisa Foric,  (EuroClio- HIP), the challenges of history curriculum development in Croatia, Snjezana Koren (University of Zagreb and Croatian History Teachers’ Association) and the work of the European House in Vukovar. There was also a very interesting visit to the Centre for Peace Studies, a non-profit association of citizens whose mission is promoting non-violence, human rights and social change through education, research and activism. Challenges identified at the PLA on inclusive history education included: history being (ab)used for political purposes; the difficulty of teaching (a common) history in post-war countries and young democracies; the difficulty of building a multi-perspective historical narrative; and the challenge of dealing with language differences between communities and countries.  Key recommendations emerging from the PLA included: the importance of daring to question convictions and rethink the purpose/goals for school history education; the need to deepen discussions about historical narratives and focus more on what connects people, on peaceful solutions and less on war; the need to be aware that curricular planning for history needs an open fora of discussion; making sure schools are safe environment for addressing the complexities of the past.

Panel discussion: Initiatives to address history education and the European dimension of history

Teaching and learning about European history

The second day was hosted at the House of European History, and began with an introduction and guided tour of the museum which opened in Brussels two years ago, in a former dental clinic for deprived children. It was decided that the House would focus mainly on 20th and 21st century history, and on phenomena which originate from Europe, are widely spread in Europe and are still relevant today. It produces online resources for teachers in five thematic areas – migration, conflict, human rights, communication and identity – and runs workshops with educators. https://historia-europa.ep.eu/en/educators-teachers/classroom-activities

The exhibitions and materials at the House are prepared from expert teams bringing insights from across of Europe.

Building bridges through inclusive and cross-border history education: learning history in and out of school

Joke van der Leeuw-Roord from EuroClio/Lifelong Learning Platform presented the draft Thematic Fiche on ‘Building bridges through inclusive and cross-border history education: learning history in and out of school’. She underlined that the Fiche focuses on the third area of the mandate of the Working Group, on Promoting a European dimension of education and training, which includes a focus on multiperspectivity in history teaching. The learning and teaching of history is perhaps the most discussed school subject; rethinking history education became particularly an issue after the Second World War, with recurring changes in history curricula. The concept of historical thinking has developed over time, including 6 key concepts: historical significance, primary source evidence, identify continuity and change, take historical perspectives, and understand the ethical dimension of historical interpretations. One key concept is multi-perspectivity; this includes that the past is perceived differently according to a person’s social, generational and sexual background as well as belonging to different ethnic, linguistic and religious communities. History is often controversial and addresses sensitive issues: European curricula represent mirrors of pride and pain, damage done to others are often not even mentioned. Over time, agreement has been reached that the subject is based on competences giving equal importance to knowledge, understanding, skills, attitudes and values. One key document is the 2018 European Reference Framework Competences for Lifelong Learning, which includes specific references to the learning and teaching of history applying target 4.7 of the UN Sustainable Development Goals  (SDGs). One issue for history teaching is the issue of curriculum overload. The Fiche also underlines cross-border initiatives and support on history education from, in particular, the Council of Europe, but also UNESCO, OSCE and the European Union, as well as initiatives from civil society including Georg Eckert Institute, CDRSEE (Centre for Democracy and Reconciliation in Southeast Europe), and EuroClio – Inspiring History and Citizenship Educators. Joke underlined that the transversal approach is the same as that seen yesterday for media literacy: critical thinking, question/inquiry, reflection, analyse and evaluation, and differentiating between fact and opinion.

The Working Group then divided into four breakout groups to discuss the Draft Fiche, and highlight further issues, reflections, recommendations and inspiring practices to include in the revised Fiche. The discussion in this session was very much inspired by the visit to House of European History. People reflected on the exhibition, on the museum and on history education in general. They gave a variety of recommendations which will be conveyed to the Museum and included in the public version of the fiche on ‘Building bridges through inclusive and cross-border history education: learning history in and out of school’. In the session representatives of the Member States were often surprised about their ignorance regarding the existence of the museum, and expressed the need for better outreach of the House of European History towards the EU Ministries of Education. In general, all agreed that the traditional focus on national history had to be broadened into a multi-perspective European and global approach. The participants also understood that history should move away from an overloaded knowledge-driven curriculum to an approach giving equal weight to knowledge, understanding skills and attitudes.

This report was written using, among others, the non-public minutes of the Working Group Meeting