Hélène Budé-Janssens, EuroClio co-founder and first EuroClio board secretary, passed away on 28 August 2022 at the age of 82. Her final years were marked by ailing health, a source of great frustration for her. She was a strong person involved in a wide variety of activities throughout her life, which had become impossible for her in these last few years. Knowing how capable and competent she was, it was painful to witness her struggling in this way.

Hélène Budé-Janssens studied history in Nijmegen, The Netherlands, and became an enthusiastic history teacher at Sint Maartens College in Voorburg near The Hague. She remained at the school throughout her entire career, even after she became involved with EuroClio in the last ten years. Her school was an important network for EuroClio in its infancy, sometimes providing the opportunity for study visits; two of the first EuroClio staff members, Marion Kuipers and Daan Lefebure-Heerens, were her former students.

In the late 1980s, Hélène was an active board member of the Dutch History and Citizenship Association (VGN), maintaining a keen interest in European affairs. She urged a then rather reluctant board to pay greater attention to Europe and use opportunities offered by the Dutch European Platform, which had been established in 1980 to strengthen the internationalisation of education in Dutch schools and teacher training programmes. If nothing else, she managed to convince me, and together, we went on a first trip to Paris, where we enjoyed wonderful food and excellent drinks but gained little educational content. Upon our return, the rest of the board remained hesitant about the benefits of history education that went beyond borders.

When I, as chair of the VGN board, returned from the famous 1991 Council of Europe meeting in Bruges with the idea of setting up an association for European history education, Hélène immediately volunteered to join this project. With her excellent connections from the European Platform and the Dutch Ministry of Education, she was able to garner the first Dutch support for the fledgling EuroClio. Within a year and following many (faxed) letters, we were able to bring together seventeen history teachers’ associations in Strasbourg in November 1992. During that EuroClio Foundation meeting, Hélène was elected board secretary, a post she held until 1999.

Hélène was a great companion and networker. She wrote endless letters and faxes, and made the first EuroClio financial calculations, often on the backs of envelopes. This sufficed until donors became more serious about financial administration, and even then, she naturally had a PWC auditor in her network to help. She was co-organiser of the complex and expensive Council of Europe conference in Leeuwarden, and of all other EuroClio annual meetings until 1999. As a coordinator, she was involved in the first EuroClio projects with Flanders and Scotland financed by the European Platform, and the first European Union PHARE project with England, the Czech Republic, Denmark, Scotland, Slovakia and The Netherlands. She acted as advisor for the first MATRA projects in Russia and the Baltic states. She attended too many conferences and seminars to count. In the late 1990s, her involvement with EuroClio diminished, partially as a result of her deep grief following her husband’s death. Nevertheless, she continued to be engaged with the organisation as a board member of the EuroClio Foundation until its dissolution in 2007. 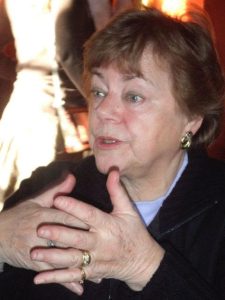 Hélène, always to be seen in her red jacket, was a passionate and political person who demonstrated a strong sense of justice. Already in the mid-1990s, she worried about the growing nationalism she encountered while working for EuroClio. In 1995, during a major Civitas International Programmes conference in Prague, she had a heated debate with American delegates about the possibility of limiting the expression of extreme nationalism: the Americans considered this to be an unlawful restriction of freedom of speech, while Hélène regarded this as hate speech. These discussions remain relevant today. In Estonia in 1998, she met a young man who was interested in a political career but had few concrete ideas of what he wanted to achieve. In direct language, Hélène told him that pursuing a political career obliged one to serve society rather than one’s own interests. Looking at some of today’s politicians, her observation is still fitting. While she was active at EuroClio, Hélène was also chair of the VGN, and, with great effort,  succeeded in safeguarding and even strengthening the position of history education in the Dutch upper secondary curriculum.

In short, Hélène Budé-Janssens deserves a place among the pantheon of those who serve society. In her case, her service came in the form of her special passion for high-quality and responsible history education. I shall remember her as a cherished friend and colleague during very eventful times.