In Memoriam to Martin Roberts

In Memoriam to Martin Roberts

Member of the first EuroClio Board and Bulletin editor 1992-1997

Martin Roberts died peacefully surrounded by his family on the 7th November 2021. His health suffered in recent years some serious setbacks and it had been slowly failing, especially since the summer of this year

Martin Roberts started as a history teacher in Leeds, Essex and Bedfordshire. Between 1981 and 2002 he was Headteacher of the Cherwell School, Oxford. He was member of the Historical Association (HA), frequently on the HA Council and from 1991-93 Deputy President.  He contributed to the development of the History National Curriculum for England through its many iterations. After his retirement worked on the Academic Steering Committee of the UK Prince’s Teaching Institute.

Mike Maddison, who was the National Lead for History from 2008-15 commented that: …. In all our discussions, his knowledge, experience and expertise shone through, and all were focused on improving what was happening in lessons in schools. He wanted pupils of all ages to have a rich diet and to take into adulthood a clear knowledge of the past, why history matters and why it must be understood by all. He was a fountain of knowledge and a great raconteur too…He was a passionate advocate of history teaching and history teachers, his contribution was immense, and he will be missed.

A delegate for the Historical Association Martin Roberts was present in 1991 at the famous Council of Europe conference History Teaching in the New Europe, in Bruges, Belgium, where historians from East and West were meeting for the first time since 1949. He also participated as Historical Association delegate in the founding EuroClio meeting in November 1992 in Strasbourg, France. At this meeting, Martin was elected a member of the EuroClio Board and volunteered to become editor of the EuroClio Bulletin. A complex endeavour in a time without the internet and in a period when EuroClio had still two working languages: English and French. Martin worked in close cooperation with Claude Alain Clerc, the Swiss French speaking EuroClio Vice-president, to ensure that the Bulletin appeared twice a year in the two official languages during the Nineteen Nineties. 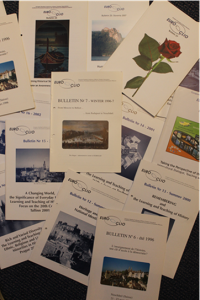 In the first editorial of Bulletin 1 of November 1993, Martin Roberts commented that he wanted to write about developments in history teaching in Europe. And remarkably, in this very first Bulletin there was already an article about history and information technology. Martin also edited thematic Bulletins on topics such as Teaching about Potsdam and its Consequences and History Teaching, a Key to Democracy both related to the EuroClio Annual Conferences in Berlin and Neuchatel.

In Bulletin 5 (Winter 1996) Martin Roberts reflected on the deep impact made on him by his discussions with friends in EuroClio as well as by his editing of the Bulletin for four years. He wrote that such conversations “made me think harder about the purposes of school history teaching than at any time since I started work in the 1960s. Compared to 1966, I am much more an instrumentalist. School history with the right choice of subject matter and emphasis on particular skills is the most significant subject in the curriculum if young people are to gain a serious understanding of democracy with its inherent fragility and a healthy sense of national identity which is sensitive to the tensions between national and international needs”. An argument which seems still valid in 2021.

In 1995, Martin Roberts led the English team in the project ‘Encouraging Democratic Values through History Education‘, the first big EuroClio European Union project, sponsored within the Phare/Tacis Democracy Programme. Almost 100 history educators participated in this project with study visits to the Czech Republic, Denmark, England, The Netherlands, Scotland and Slovakia. The project ended in Prague in December 1995 with a big Conferenced with all the project participants organised by Maria Homerova and Helena Mandelova, very active Board Members of the Czech History Teachers Association (ASUD).

The first EuroClio Board worked very well together, and enjoyed meeting each other. These meetings were most often in my house in The Hague, and were wonderfully well catered for by my husband Jan, who provided excellent food for us. The summer meetings were in Diksmuide, Flanders, in the house and garden of the Belgium Board member Paull Vandepitte. During those meetings Paul’s wife Alice lovingly looked after us. In 1997, one year before his mandate officially ended, Martin decided, with great regret, to step down from the Board, in order to avoid all the Board members retiring at the same time. He wanted to assure continuity and asked Sue Bennett, who later was elected the second EuroClio President, to take his place as Bulletin Editor. 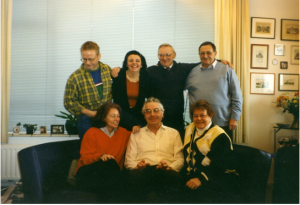 I remember Martin as a very passionate historian, didactic thinker and School head. I was very happy to serve with him in the first board of EuroClio, and he was always an inspiration to me and other less learned and knowledgeable colleagues, whom he met with respect, interest and a great sense of humour. He always remembered that our main task as teachers is to serve and facilitate the learning and development of our pupils and students. Jens Jørgen Dalsgaard, EuroClio Board Member 1992-1998.

In 2004 Martin Roberts edited After the Wall. History Teaching in Europe since 1989. This publication addresses a wide variety of topics among others as History teaching, national identity and citizenship, minority issues, textbooks and information technology. The book was in 2008 extensively reviewed by W. Tulasiewicz in Compare: A Journal of Comparative and International Education. And in 2020 Yosanne Vella states in her article The Development and Progress of the ‘Source Method’ as a History Teaching Method: Practical Classroom Examples from Malta for the Palgrave Handbook on History and Social Studies Education that After the Wall is “a classical work on the European history teaching of the period” 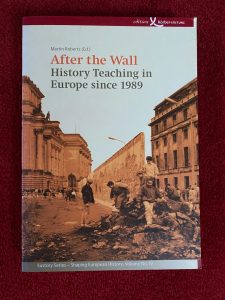 ‘With 33 individual contributions written by 46 authors set to deliver a critical account of recent changes in the teaching of history in 27 countries, and allocated, according to a system of summarizing themes, to nine chapters (plus an appendix), this volume is an ambitious project. Given the growing interest in history teaching in schools in Europe, this is also an eminently topical book, the title bound to catch the attention not only of history teachers and historiographers but of wider groups of educationists and politicians.”

After this last big endeavour for EuroClio Martin Roberts actively withdrew from the European scene and concentrated his energy on education and particularly history education in England. He leaves behind a big oeuvre of school history textbooks and articles arguing for high quality history education.

“His passion for education and his commitment to what is best for young people is both infectious and influential not only in his own school but across Oxfordshire.” Richard Howard, principal education adviser at Oxfordshire County Council.

In recent years I was planning to visit him in Oxford by using the new direct Eurostar connection from Rotterdam to London. However, the Eurostar company first postponed the beginning of the connection several times and when it finally would run, covid interfered. I am really very sorry not have been able to visit him. We exchanged occasionally (long) mails sharing our passion for history education and our concern about the Brexit. When the message of his death arrived in my mail box I felt sad. The world becomes slowly more empty around me, and some of these losses unleash more emotion than others. I shall miss Martin very much.