EuroClio recently joined forces with the National Committee of Russian Historians in co-organising the 1st World Congress of School History Teachers. The Congress, which took place in Moscow 4-7 October, brought together more than 300 history teachers from around the world to discuss both thematic and methodological issues of history education. As co-organisers, EuroClio had the opportunity to bring a large delegation of both speakers and participants to Moscow. 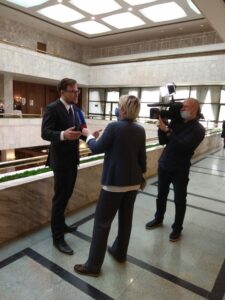 The Congress tackled a number of thematic issues, most notably Revolutions in World History, the role of textbooks in history teaching and how World War II is taught across countries. EuroClio’s Secretariat staff and several Board members were present as either participants or workshop hosts at all Congress sessions. Here are our three key takeaways from our stay in Moscow:

History teachers in Europe, Russia and the rest of the world all face similar challenges

Being a history teacher can be an incredibly rewarding profession. Teachers contribute to the personal development of young people, teaching them to think critically and how to respectfully disagree with one another. History teachers are also uniquely placed to provide students with the toolbox needed for recognising and resisting manipulation or “fake news”.

Being a history teacher can also be challenging. During the World Congress it became clear to us that most of these challenges are widely shared across borders and educational systems.

Teachers in most countries struggle with the sheer amount of content that they need to cover in their curriculum. With too many facts and too little time, it is difficult to teach students how to think rather than instructing them what to think. An overloaded curriculum also makes it difficult to focus on questions and topics that resonate with a teachers’ classroom, selecting questions and topics that tick the right boxes with their students. It is also challenging to keep up to date with the latest research, especially when there is so much content that needs to be covered.

History teachers everywhere have also been faced with an additional challenge as they struggled to transition to teaching online during the pandemic. Online teaching, in some form at least, is likely to stay with us even beyond the current pandemic, but few teachers have been given specific training on teaching methodologies or the practical aspects of online teaching.

Shared challenges also call for shared efforts and EuroClio’s team left Moscow with a renewed faith in cross-border collaboration with colleagues both in Russia and elsewhere. Our joint resolution with the National Committee of Russian Historians is hopefully a small step in the right direction. 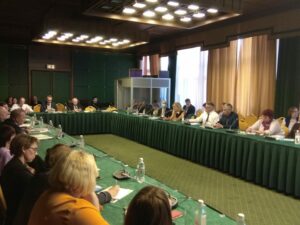 Several sessions of the World Congress in Moscow were dedicated to the Second World War – including by EuroClio Ambassador Emina Zivkovic who provided a personal reflection of how her own perception of the war and how to teach it has changed over time. A history teacher in Belgrade, she also pointed to the longer term repercussions of the memory of the war for the relations between peoples of the former Yugoslavia.

Perhaps not entirely surprising, the history of World War II remains both a difficult and sensitive subject. We left Moscow with an impression that a prevailing view in Russia is that there are efforts elsewhere to intentionally downplay the role of the USSR in WWII. Delegates from Russia frequently emphasised that history must not be “rewritten” to remove or mitigate the contribution of the Soviets in the defeat of Nazi Germany. Speakers and participants from other former Soviet republics and more peripheral regions of Russia itself also called for a greater recognition of the contributions of their own republics or regions in the defeat of Nazi Germany.

World War II is evidently of immense importance in Russia, as witnessed by choice of language (it is largely referred to as the “Great Patriotic War”) but also by recent legal measures adopted by the Russian Federation that criminalise the “defaming of War veterans”. The law was invoked in a question from a Russian teacher trainer present at the WWII roundtable (how can we investigate as historians when faced with the threat of legal repercussions?). The response from the chair of the panel, the editor-in-chief of the journal Historian, Vladimir Rudakov, was revealing: According to him “the history of WWII victory is akin to a ‘civic religion’, in need of regulation in order to prevent ‘social explosions’ with unpredictable consequences” (see video recording).

Linguistic – and cultural – challenges are there, but can be overcome!

One of the biggest challenges in organising a World Congress is language. The sessions at the Moscow Congress were all held in either English or Russian with simultaneous interpretation. Evidently, a lot of thought and planning had gone into making this run as smoothly as it did, but, as EuroClio’s bilingual staff members could attest to, things nevertheless got lost in translation on occasion.

In addition to language, cultural differences must also be overcome. For instance, what constitutes an interactive or participatory workshop in one setting might be seen as static in another.

We witnessed a great deal of openness and interest in innovative teaching methods, including place-based and project-based learning, along with open discussions with colleagues both from Russia and elsewhere.

A number of already existing initiatives in which historians and history educators are working together across borders were presented during the Congress that can be used to seize this openness and interest: Textbook committees, the development of educational resources, creation of parallel histories, and source banks. These resources, which are often complementary to textbooks, can help to promote a more nuanced and complex image of the other and promote multiperspectivity in history education.

These and other initiatives give us great hope for the future editions of the World Congress and we look forward to continuing working together with colleagues in Russia and elsewhere to facilitate international dialogue, exchange and cooperation among teachers, methodologists, textbook authors and other representatives of the history education community in the future.

To watch recorded sessions of the 1st World Congress of School History Teachers, please visit the youtube channel of the Institute of World History.

Please also consult the Joint Resolution adopted by the National Committee of Russian Historians and EuroClio at the conclusion of the Congress.