On September 25th, ‘History that Connects – Sri Lanka’ hosted the second webinar of a series on creative teaching methodologies. Following the first workshop on stamps as historical sources, this second workshop hosted the speakers Irushi Tennekoon and Misko Stanisic to shed some light on the use of graphic novels in history education. Irushi spoke about what graphic novels have taught her about history and memory, whilst Misko told his experience in creating graphic novels specifically to be used in the history classroom.

‘History that Connects – Sri Lanka’ is an initiative resulting from a cooperation between Strengthening Reconciliation Processes in Sri Lanka (SRP) of the Deutsche Gesellschaft für Internationale Zusammenarbeit (GIZ), EuroClio, and the International Society for History Didactics. The workshop series on creative teaching methodologies has the purpose to foster collaboration between educators and educational content creators.

Irushi Tennekoon is an artist and an illustrator but also an educator, as she currently teaches the English language at the University of Colombo. She started off her presentation by sharing her internal conflict about having to choose between what society perceives as two different paths.

“It’s been a confusing journey for the most part. I’ve always felt like I’ve been at a crossroads where I had to choose one or the other. […]

I carved out my own path in this journey and I found an intersection. Education systems in the world try to put us in boxes: I was one of the students who felt left out of the system and I had to make my own path.”

Irushi eventually managed to find an intersection between art and education. First of all, she has incorporated art in education by using art-based resources and animations when she is teaching language to her students. Conversely, she draws from academic practices and uses research methods in her approach to art. She explores art through research, for example in her master thesis she focussed on graphic novels. She has recently produced an animated series ‘Animate Her’ on exceptional female role models working and living in Sri Lanka. For the series, she interviewed a group of women (author and illustrator Sybil Wertosinghe, architect Amila de Mel, marine biologist Asha de Vos) about their work and brought to life their characters by creating an animation for their stories.

“[Our system is] such a one-track kind of system and so many are left behind just because our system doesn’t help them – most of us. That’s why it’s so important to look at alternative narratives and alternative texts. If history was taught to me through a graphic novel or if subjects were taught to me through art I would have had a completely different experience of school.” – Irushi Tennekoon

Irushi perceives and describes art as something very fluid that can transcend disciplinary boundaries, a feature that became the justification for using graphic novels in the history teaching context. She then invited the audience to reflect upon how we learn history and the importance of storytelling.

Irushi explained why comics can be such a powerful tool in storytelling by drawing on Scott McCloud. In ‘Understanding Comics’ (1998), he drew a continuum of faces, with a very realistic image on the left side, which slowly transitions into a very stylistic abstract image. Whilst the person in the left-hand corner is not recognisable, the next to last person might look like someone we know: we can start relating to these characters when they become more abstract.

“The final one is so abstract that, in a sense, it could be you. If you draw a very quick comic of yourself, you could draw yourself like this. And that’s the power of comics, that you can instantly relate to a character, you can see yourself in there. And if you use a text like this in a history classroom and if you can engage with a text on such a personal level, see yourself in the story… it can be an amazing way of reading and understanding history.” – Irushi Tennekoon

What is a graphic novel?

Whilst comics are often described as a hybrid of word and picture, Irushi looks at comics as a language on its own, where words and images are parts of a whole. Artist and colour theorist Joseph Albers speaks about something called ‘word pictures’. He says: “In reading, we do not read letters but words, words as a whole, as ‘word pictures’.” [Interaction of Colour, 2013]. Drawing on this, Irushi defined a graphic novel as a book-length work that is written in the language of comics.

She specifically talked about three autobiography books that tell the life story of the author written through comics, three stories that capture a moment when he or she went through a big change in history.

To show the potential of the medium, Irushi shed light on how time and space can be used in a comic and showed specific examples of how these novels have incorporated photographs. These novels are all based on traumatic history and traumatic memories, and Irushi suggested that the arts could be a good way of processing these memories and dealing with trauma. Irushi talked about postmemory, a term coined by Marianne Hirsch which refers to intergenerational memory or memories that we would inherit from our parents or grandparents, stories that we were told and might become so embedded in our memories even if we did not experience them in person. This is particularly applicable to Sri Lanka, where newborn generations are inheriting trauma memories of previous generations. Irushi spoke about the danger of this: “I do know they are becoming silenced and repressed memories and they have been passed down as trauma memories to other generations. How do we make sense of these memories? And it’s not just about the memories we have. We have had so many natural disasters, including the tsunami, and now with the pandemic, there is so much sadness and so much trauma that it’s just being buried and we don’t really know what to do with that trauma.”

How graphic novels can be used in the history classroom 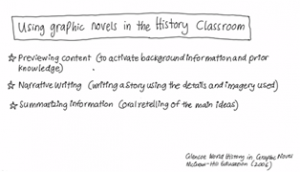 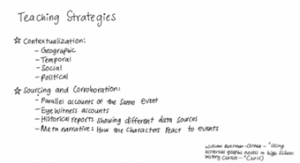 “There is an inner need for a person to remember, to keep the memory” – Misko Stanisic

Misko Stanisic, a co-founder of Terraforming, shared his experience in developing educational methodologies and teaching materials about the Holocaust. Terraforming is an NGO based in Novi Sad (Serbia) aiming to empower cultural remembrance by combining best practices in contemporary pedagogy with new-media technologies.

Misko is from Sarajevo, and as a refugee from the civil war, he fled to Stockholm in 1993 and has been based in The Netherlands since 2012: Misko started his presentation by showing a picture of his kitchen in Amsterdam and a little ashtray he has put on the wall. Before leaving Sarajevo, he took his grandmother’s ashtray just because it fitted in his pockets, and not because it was representative of his past or particularly valuable. For many years, he didn’t pay much attention to it:

“Only recently I realised this was the only thing I had originally that I took from my home when I escaped. I’m showing this because it means something to me, this quite insignificant object, that was not even representative of my life, but it is now. We remember through so many different ways and we even use artefacts and stories. We need it. There is an inner need for a person to remember, to keep the memory. That’s why I put it on the wall.” – Misko Stanisic

Misko is aware that his personal experience might not be the same experience for other people and for this reason, he invited the audience to reflect upon the question “who owns the past?”. He explained why it is vital that students learn about the Holocaust and recommended looking at “Recommendations for teaching and learning about the Holocaust” developed by the International Holocaust Remembrance Alliance.

Together with the Historical Archives of Belgrade, Misko started to do historical research about the Sajmište concentration camp, where nearly the entire Jewish population of Belgrade and the surrounding areas was murdered – specifically from 8 December 1941 to the end of March 1942. At first, they wanted to find real people who were protagonists of this history so that they could tell their personal stories, but then they realized that they couldn’t: there were only very few photos. For this reason, they decided to illustrate stories instead. They were also faced with the question: is it okay to dramatize history?

“Our protagonists were killed in the camp, so we could not ask anyone to tell us about the details and we were facing the fact that we need to dramatize parts of it, which is why I’m not sure if it’s easy to say whether our graphic novels are fictional or not fictional. They are certainly based on historical facts and all protagonists presented in our novels are real, but not all the details we represented in our novels are based on facts, they are mainly based on dramatization.” – Misko Stanisic

The objective is also to help students to understand how we know this history and to address this phenomenon called ‘distortion of history’ which is propagating falsified or distorted facts about the Holocaust. Misko wanted indeed to demonstrate that the novels are based on a huge amount of historical documentation and that illustrations in the novels depict history accurately. Real historical places are drawn in a realistic way so that students would recognise streets and buildings, and the historical photographs are available next to the illustrations as proof that what readers see in the illustrations is accurate. In addition to that, there are hundreds of investigating tasks for students that teachers can choose from, so that pupils can research online available digitised archival records and other sources about the context and daily life. A very useful exercise is, for example, stimulating a comparative analysis of the same locations at different times.

Behind the scenes: creating a novel for educational purposes

Misko shared his experience in creating educational graphic novels and explained that there are two main streams going in parallel: history at a global and local site. The base of everything is historical events, but also people. Whilst creating the novel, they are selecting what part of already well-known history and events they will use, but they are also looking for personal stories. At some point, there is no more data available about a particular family, so the work proceeds by assumptions and only when something is plausible or probable it can be added to the story. Then they start developing the dramatization, interviewing survivors, drawing from historical newspapers, working very closely with historians and other experts in Jewish traditional culture. Only then, they invite illustrators. Every graphic novel is illustrated by a different artist: by choosing to use different illustrators, they choose to highlight that there are many different, equally valuable ways of looking at history and making sense of historical events. 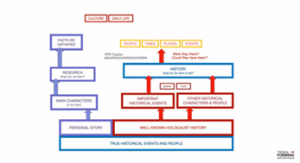 Why is this important?

Another time, Misko was called by someone who claimed: “you created a novel about my family”. Misko recalled how shocked he was, as they thought that all the members of that family were killed. He also started wondering whether they made a terrible mistake by creating the novel, as obviously not every detail can be accurate, not everything is absolute and real truth, so he apologised. Nevertheless, the person said: “I had nothing, now I have a story”. Misko concluded:

“A need for memory is such that even when we are creating educational material, a dramatised story, it fills the void, the need of people to have a memory, to visualise it and I am very proud that we contribute to it.” –

The next workshop on creative teaching methods will be about strategies for using counterfactual history in the classroom.. Join us on Thursday 28 October at 2:30 pm CEST. Click here to register!