The allure of authoritarianism and modern populism: A keynote lecture with Prof. Takis Pappas

The allure of authoritarianism and modern populism: A keynote lecture with Prof. Takis Pappas

On the 15th of September on the international day of Democracy, EuroClio hosted the first session of a series of online workshops entitled A Resilient Promise: Teaching the Fragility of Democracy.

Prof Takis Pappas opened our webinar series on democracy with a compelling keynote lecture on The allure of authoritarianism and on modern populism.

Democracy is something that must be learned at early age

Prof. Pappas commenced with a strong statement that democracy is not something that you can touch or feel. Democracy in his words is something that must be learned at early age. He emphasized that democracy cannot be felt, sensed, or otherwise experienced other than, through formal education and practice from early age, which begins at school. In this respect, he added that teachers are the responsible for teaching young Europeans how to be good democratic citizens.

Furthermore, he noted that there is a challenge how to teach democracy at schools. In this regard, the idea of applied political science helps us to draw lessons from past historical and political experiences to ameliorate our lives in modern societies.

To better understand democracy prof. Pappas highlights some important concepts that we often hear but do not know what exactly the meaning of. He defines democracy as a pluralist political system in which the incumbent party may lose office after free and fair elections.

And what is then non-democracy? Non-democracy is a system in which some leaders hold nearly unbounded and arbitrary power even if there are (unfree & unfair) elections.

Modern populism is, in Prof. Pappas taxonomy, a novel political system which is democratic but militates against political liberalism. Hence, democratic illiberalism.

The final important concept is nativism, which is a liberal democratic system meant to protect the interest of native-born citizens against immigrants and other populations. This system is liberal and democratic but prioritize the interest of the natives.

Prof. Pappas clarified the distinction between populists and nativists. When talking about a perceived backsliding of democracy, an association is often made with populists and populism. 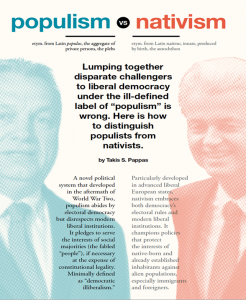 The Difference between populism and nativism, according to Prof. Pappas. Source : https://pappaspopulism.com/populism-nativism-infographic/ 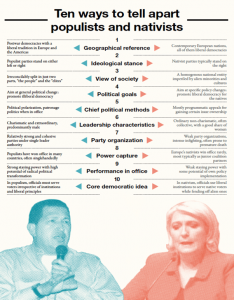 The lecturer argues that when populist parties come into office they tend to stay in office for many years, while attempting constitutional changes in effect replacing the liberal constitution with an illiberal one. The difference with the nativist parties is that they do not intend to change the (liberal) constitution. In Europe, these parties have so far not managed an outright majority and have only been in power through coalition governments.

As previously mentioned, when populist come to power, they try to change the constitution. In some cases, they succeed, in others, they fail. In the infographic below you can see the major populist and nativist parties that, according to Dr. Pappas’ research, endanger liberal democracy. 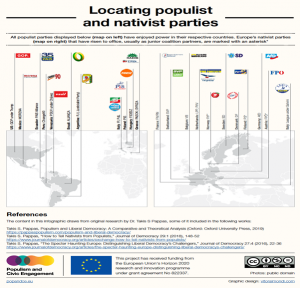 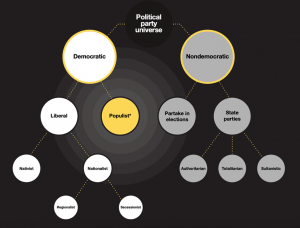 According to Prof Pappas, we can successfully located all political parties, irrespective of time, geographical space or political circumstance, in the simple “map”.

Using this overview, Prof. Pappas demonstrates the political landscape in today’s democratic Europe. He claims that in Europe there are no more than six or seven types of parties. We will find liberal democratic, populist, nativist, nationalist, regionalist and secessionist, antidemocratic parties.

A typology of parties in Europe.  Blue refers to liberal, yellow to nativist, and magent to populist political parties. 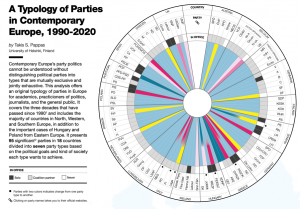 In his lecture, Prof. Pappas introduced the audience to is “typology of parties” wheel. The wheel comprises 19 significant parties in 18 countries divided into seven party types based on the political goals and kind of society each type wants to achieve. In terms of historical evolution, the wheel was largely blue (liberal) until about 1990.

Prof. Pappas underlines that the infographic gives us a very dynamic idea of the forces of liberal democracy, where it is moving towards and what happened with the opponents of liberal democratic parties, both populist and nativist parties.

What can we learn form that? Prof. Pappas summarized several key takeaways from his lecture.

Europe today as an adherent of democratic liberalism is, in a sense, standing alone. The number of antidemocratic “rogue states” includes Russia, Turkey and other Middle Eastern countries. With Brexit one of the most liberal nations in Europe has left the EU.

Takis S. Pappas is a scholar of political science. He has done research on populism, democracy, and political leadership. Presently, prof. Pappas is a docent and associate researcher at the University of Helsinki, Finland, working within the EU funded Horizon 2020 project “Populism and Civic Engagement” (PACE). His latest book Populism and liberal democracy provides an exquisite and concise analysis on the notion of populism, and how it threatens liberal democracy.

About the Author: Ralitsa Angelova