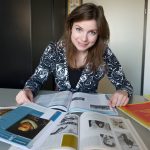 Tina van der Vlies is an assistant professor of history at Erasmus University Rotterdam. In 2019, she successfully defended her PhD dissertation ‘Echoing Events. The Perpetuation of National Narratives in English and Dutch History Textbooks, 1920-2010’. Since her research provided a better understanding of the potential mobilizing power of national narratives in societies, it was awarded with several prizes.

Decolonising the history curriculum is a topical issue.[1] Decolonising in this context means a call for what Meera Sabaratnam describes as a “better historical awareness of the contexts in which scholarly knowledge has been produced”.[2] Especially since the nineteenth century, knowledge about the English and Dutch nation has been built on colonial and racial structures. Sabaratnam asks us to look at our shared assumptions about how the world is.

One way to achieve this aim is to challenge traditional frames in which history is taught and understood. The most well-known frame in which history has been presented in history textbooks is the national one. This is understandable since history is a compulsory subject in many national curricula. National regulations and public discourses about school history are often connected to debates about citizenship and values, in attempts to attribute specific characteristics to the nation and its inhabitants. However, stories from different countries that emphasize national unique characteristics often share interesting similarities. For instance, various politicians stress ‘national features’ in their speeches, while perpetuating nostalgic and heroic images of the nation as well as implicit colonial world views. Hence, this article considers national narratives in history textbooks from a global perspective in order to shed light on some of these resemblances. Transnational narrative structures are easily overlooked when national contexts and their accompanying stories dominate the history curriculum.

National narratives can share the same underlying interpretation pattern. Memory scholar James Wertsch makes a distinction between specific narratives and schematic narrative templates. Specific narratives are uniquely situated in space and time and deal with specific events, persons and periods. These different stories about the past can – although they vary a lot in their details – look like replicas as they share the same underlying narrative structure. Wertsch describes this shared storyline as a schematic narrative template, as a basic building block of collective memory that connects various specific histories.[3] However, Wertsch warns that these schematic narrative templates are not universal archetypes; he explains that certain narrative templates are part of a specific cultural tradition. For example, the “triumph over alien forces” template dominates Russian collective memory and although this template is available to members of other cultural traditions as well, it is not as prevailing as in Russia. For example, it can also be found in the American tradition but will be outweighed by the dominant American “quest for freedom” template.[4]

During my PhD research, I discovered how national narratives in English and Dutch history textbooks overlapped and interfused, and how certain national frames of references were perpetuated over time. Textbook authors narrated different histories as ‘echoing events’ by interpreting them in the same way and by using the same combinations of historical analogies. They gave meaning to history with these recurring connections.[5] Next to the fact that this mechanism was visible in history textbooks from both countries, my research revealed some transnational narrative structures as well.

Another similarity is the David-Goliath narrative structure, referring to the Biblical story of the shepherd boy David who courageously fought against the giant warrior Goliath who was twice his size. Although the shepherd boy was armed with nothing more than a few stones and a sling, he defeated the heavily armoured and weaponed giant. It is a classical story about how the underdog can champion over a major power. This structure is present in several national narratives as well. For example, Dutch national narratives are often presented in line with the phrase ‘small but brave’. The Netherlands is a small country and its founding narrative is located in the sixteenth century: the low countries revolted against the mighty Philip II and this resulted in the independence of the Dutch Republic. It is interesting that the same narrative structure is present in the southern low countries, nowadays Belgium. In 1999, ‘the three Belgians’ released a modern musical version of the Belgium national anthem and the phrase ‘small but brave’ plays a key role in this song.[6] More recently, in 2014, the Belgian author Mark De Geest published his book Brave Little Belgium.

In England the same narrative structure is visible, although the exact phrase differs from Belgian and Dutch national narratives. English history textbooks emphasize how England had repeatedly ‘stood alone’ against a superpower, for example against Napoleon during the Napoleonic Wars or against Hitler during World War II. The latter interpretation was reinforced by the British prime minister Winston Churchill’s wartime speech on 20 August 1940 in which he stressed: ‘Never was so much owed by so many to so few’. This myth of ‘standing alone’ has dominated in various English history textbook series. Although the myth is debunked and various new textbook series have been published without the myth, it still appeals to people and continues to play an important role in English collective memory. That is why the well-known expression also surfaced several times in the Brexit debate, which is based on nostalgic images of Britain as a colonial empire: “Rule Britannia! Britannia rules the waves”.

A third similarity between history textbooks from various countries is the “quest”, such as the quest for freedom, tolerance or progress. The idea of a quest is a well-known storyline of several novels and films, such as Lord of the Rings and Saving Private Ryan. A hero needs to overcome several problems during the journey to reach the ultimate goal in the end. It is certainly not my goal to downplay history textbooks – it is extremely hard to compose a textbook that suits a certain age-population and their interests. Next to contents, textbooks need to be pedagogically in line with the audience and – also important – the text and the assignments need to be read and accomplished in a limited time frame. Moreover, politics and society are demanding as well. What I would like to stress in this paragraph is that the story-form of national narratives can intertwine with ideas about history itself. (National) history can be defined as a process towards freedom, tolerance, or progress. This is also visible in academic historiography: in 1931, Herbert Butterfield published his well-known book The Whig Interpretation of History, in which he criticized historians’ retrospective creation of – especially national – progress.

This article discussed the decolonisation of the history curriculum by showing that ‘unique’ national histories in textbooks from former colonial empires often share remarkable similarities: the stories often include implicit colonial references and images, and contain the same underlying storyline or interpretative structure. It is important that pupils understand how national histories are framed by the selection of specific persons, topics, periods, and sources – while ignoring others – and by the underlying interpretative structure. Although this is a difficult skill, it is necessary to obtain insight in national narratives’ frames in order to genuinely decolonise the history curriculum.

[1] I would like to thank the founder and special advisor of EuroClio Joke van der Leeuw-Roord for her valuable comments.