History, heritage and citizenship were regularly breaking news in this year’s summer months. We saw media images of removing historical sensitive statues, demonstrations related to the Black Lives Matter Movement and big outcries due to the murder of history and geography teacher Samuel Paty in France. In the Netherlands, an educator teaching about the freedom of expression had to go into hiding because he was threatened over a cartoon that had been on display in the classroom for five years already. The deep emotions present during these events illustrated the fact that history is not only the past, it permeates the present and even the future. These emotions made us again aware of how pride and pain are strong elements when addressing the past. They also gave evidence that we need inspiring answers on the question of how to address sensitive, inclusive and multiperspective history in classrooms. Finally, these emotional events also demonstrated the need for intercultural dialogue when we experience colliding value systems and extremism.

On 12 February 2015 the members of the European Council requested action after the wave of violence in France and Denmark. With a Declaration on Promoting Citizenship and the Common Values of Freedom, Tolerance and Non-discrimination through Education the Members of the Council stressed their special duty to ensure that the humanist and civic values we share are safeguarded and passed on to future generations. They stated that they remained united in our efforts to promote freedom of thought and expression, social inclusion and respect for others, as well as to prevent and tackle discrimination in all its forms.  In order to achieve these goals, they called for renewed efforts to reinforce the teaching and acceptance of these common fundamental values and laying the foundations for more inclusive societies through education.

The Commissioner for Education created a Working Group within the European Training 2020 framework as a follow up of this declaration. The Working Group Promoting Common Values and Inclusive Education was asked to assess how social, civic and intercultural competences, critical thinking and media literacy, and social inclusion, non-discrimination and active citizenship are or can be applied in topics such as uses and abuses of (modern) media, inclusion of young refugees and migrants through education and also history education. The Lifelong Learning Platform in Brussels asked me to join the group on their behalf.

One of the outcomes of the working group are three thematic orientation documents produced by the members of the ET 2020 Working Group on the above mentioned topics. A fourth text about LGBTI inclusion in education can be expected by the end of the year.

I was made responsible for the theme Building Bridges through Inclusive and Cross-border History Education. It contains an overall sketch on current issues related to the subject required for a sound and innovative approach to history (and citizenship and heritage) education. It further contains recommendations from the Working Group Members and a series of inspiring practices, predominately by Intergovernmental Organisations and Civil Society Associations and organisations. The publication contains a collection of appropriate references and links. More inspirational practice related to this topic will be available through an online Compendium, which will be available by the end of the year. Needless to say is that a good variety of EuroClio projects are included.

The outcomes of the Working Group demonstrate the relevance of the issues discussed, particularly in the light of the emotional events mentioned, so evidently related to history, heritage and citizenship education. In my introductory text (p.6) of the so called fiche, I argue that historical narratives are always hotly debated in societies, and find their reflection in history education. These recent experiences were therefore not unique, they just topically exemplified this reality. The reflections and observations of the participants of the Working Group demonstrate that the members during the working sessions realized which challenges could play in the background of such emotions and hot debates.

In the reflections of the Members we read that it is indeed vital explaining why it is important to be inclusive in history education, as minority communities and migrants are often not included in a country’s history.  They recognize that one could fear for radicalization or extremism if such perspectives are not included. Minority and migrant communities could feel left out if history only focuses on the dominant national community. And finally that it was vital to create a dialogue among and with students.

Among the Working Group recommendations for history curricula, we can read that it is essential to ensure a multi-perspective and inclusive approach to history education, including various ethnic, linguistic and religious communities in new history curricula, in order to avoid any undue bias or discrimination, that it is important while teaching national history to recognize its impact on other countries and therefore to widen the perspective beyond the national viewpoint and that history teaching must allow time for discussion, and such debates should allow both positive and negative considerations.

The recommendations with focus on teachers, state that teachers should be aware of the diversity in their classrooms and recognise that young people from diverse origins bring different memories, values and cultures and that there is a need for high-quality initial teacher education and continuous professional development, supporting teachers’ capacities to address controversial and sensitive issues in the classroom.

The educational authorities are required in the recommendations that existing teaching aids, providing guidance on addressing controversial issues in the classroom, should be made widely available and that they should find pathways to involve families to make them aware of the different perspectives to key historical events and support a process of developing history culture in the family.

The members of the Working Group also warned of conflicts between different subjects such as history, social studies and civics teachers, all claiming to be the prime actor in value-based education as in fact all such subjects integrate human rights and democracy in their curricula.

On 18 November the Working Group had its final-online-session, where I could present the concluding results of its work on history education. It was clear that the challenges, which were identified by the members, were indeed the issues at stake in our societies. I also concluded, however, that identifying these issues would not be enough and that prolonged attention and concerted action is required.

I therefore added two personal recommendations. I asked the Commission for keeping the topic of value-based inclusive and cross-border history, citizenship and heritage education also as a prominent feature within the next circle of Working Groups. This is, unfortunately, not at all clear. In the Communication on Achieving the European Education Area by 2025, we can find good wordings about fundamental freedoms, tolerance and non-discrimination through education, inclusive education, and active and responsible citizenship. However, in the two out of six focus areas relevant for the history, heritage and citizenship community (inclusion and gender and teachers and trainers), there is a strong emphasis on capacity building addressing deficiencies in skills. The need for bringing a European perspective in education mirrors some of the reflections in the Working Group when it specifies that this topic shall provide learners with an insight in what Europe at large and the Union in particular means in their daily life. This European perspective should be addressed in a dynamic and plural way, encouraging the development of critical thinking (p. 7). But unfortunately these wordings hardly reflect the real challenges in the learning and teaching of history as they were identified by the Working Group.

My second recommendation was for the Members of the meeting of 18 November, representing different national Ministries of Education. I asked them to keep implementing value-based inclusive and cross-border history, citizenship and heritage education in their schools through curricula, teaching resources and adequate professional development of aspiring and practicing teachers. In fact, the inspiring practices on history, heritage and citizenship education, presented during events of the Working Group sessions rarely came from the national ministries of education. Most representatives of these Ministries were nevertheless positively interested, leading to a good working atmosphere. The extent to which the common ideas will be implemented remains an open question, however. Unfortunately, there is no clear tool developed to measure the impact of the Working Groups common work on the policies related to common values and inclusion in individual countries. We can only hope that working together for more than four years increased the awareness of the national educational authorities across Europe.

This final Working Group meeting ended my active involvement in education policies of the European Union. This is a complex system as the Member States keep their individual responsibilities towards education, with common policies only possible via open methods for coordination, such as the kind of policy learning done through Working Groups. I became involved in the early 1990s, when the European Dimension was a key element in policy making. It was easy to make contact with European bureaucrats and discuss possible ideas. Slowly the European Dimension disappeared and project funding became dominant. I was happy to have good EuroClio Secretariat Staff Members, able to obtain projects and later, when it became possible, to obtain operating grants. In my last active EuroClio years I became more and more involved in EU Working Groups and became a member of the Steering Group, later Secretary General, of the Lifelong Learning Platform in Brussels. This last position allowed me to become a real insider in the benefits and downsides of EU policy making.

I now look back at almost thirty years of European education programmes, always deeply influenced by events or currents in society. I have often participated with some level of frustration, due to its slowness and lack of understanding of what were the real issues at stake. Despite everything, they were nonetheless rewarding years giving many opportunities to the history, heritage and citizenship community. I will miss it, but it is time for me to go. 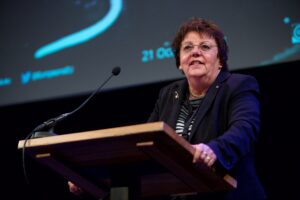