Annual Conference Keynote Lecture: Dealing with Controversy and Polarisation in the Classroom

Annual Conference Keynote Lecture: Dealing with Controversy and Polarisation in the Classroom

Why is it important that we learn to disagree with each other? How can we teach young people to disagree in a democratic and peaceful manner? Maarten van Alstein from the Flemish Peace Institute contextualized and answered these questions during the opening of EuroClio’s 27th Annual Conference. His lecture Dealing with Controversy and Polarisation in the Classroom built on empirical research, democratic theory, and insights from conflict transformation. Based on his research, Maarten van Alstein came to the understanding that schools should be seen as a place where students can explore differences in a constructive manner. Through a wide diversity of methods ranging from dialogue to artistic practice, he made a case for conceptualizing the school as a laboratory for democracy. 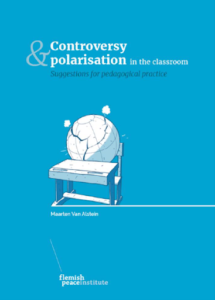 Central to the idea of tackling controversial topics in the classroom is dialogue. As tensions are rising in our society in the form of conflict and polarisation, dialogue is a method which can facilitate deliberation about societal topics and acute questions. Van Alstein illustrated the extremes of democracy with two concepts relating to the digital sphere. The first is the echo chamber, the idea that the digital sphere creates one single voice and erases multiperspectivity. The second concept describes the chaos of tweets in which polarisation and chaos become the norm. As in society, we should take these extremes into account when facilitating dialogue. In the classroom, educators should create space for democratic dialogue ranging between these two extremes.

The meaning of conflict

The quote illustrates the inevitability of conflict. Both Maarten van Alstein and Kathy Bickmore argued that conflict will always be present in society. The danger lies in the explosion of conflict. The group polarisation theory illustrates how, due to confirmation bias mechanisms, putting a group of likeminded people together will generally lead to polarisation. When people in groups polarize this can be very dangerous, think of hate groups or terrorist cells. However, polarisation and conflict can be used for the better, an example is abolitionism. There are numerous examples of positive change stemming from conflict, the women’s vote or the more recent Black Lives Matter movement. It can be, on the one hand, destructive and dangerous. But, if we are able to manage it well, we can create a force for good. Then if conflict is an ambivalent phenomenon, how do we deal with it?

While this may sound like kicking in an open door, the big challenge for educators lies in tailoring the approach to what is happening in the classroom. Finding good techniques for discussing controversy and polarisation requires making a distinction between different scenarios. Each scenario calls for a different approach. First, when the class is in turmoil, a more provocative or extreme discussion may call for depolarizing strategies. Second, controversial issues in the curriculum sometimes steer the educator into a certain direction complicating multi perspectivity. Finally, controversy as pedagogy means looking for multiperspectivity and controversy in the subject matter. This scenario allows for a more open discussion in which artistic pedagogical practices can be used, such as painting.

Defuse harmful forms of polarisation, but keep the space for discussion as open as possible

Creating an open classroom helps students express their opinions freely. When students are comfortable discussing controversial topics their generalized trust increases. Generalized trust means their trust in society and in others. This, in turn, has positive effects on citizenship attitudes as students are able to recognize that conflict is normal in a democratic society. In the classroom educators should be intent on teaching students to disagree. However, it is crucial for students to recognize polarisation. Of course, dialogue has certain limits and the emphasis should be placed on reasonable arguments. Maarten van Alstein advised that the teacher, especially initially, should focus on the language used during discussions.

A good conversation often starts with a good question

The final suggestion was that a good conversation often starts with a good question. The use of open-ended questions is something educators themselves can train. Safety for all pupils should be guaranteed. It is a good idea to be impartial as a teacher, but not necessarily neutral, reflection is, of course, needed on positionality. Additionally, van Alstein advised not to start discussing the most controversial topics first. Start with a more safe and so called colder topic. When students feel more comfortable discussing, one can move on to hotter topics. Actively facilitate the discussion, it might be polarising otherwise.

At the opening of EuroClio’s 27th Annual Conference, Maarten van Alstein argued that conflict is inevitable. Teaching students this notion can help facilitate dialogue and prevent polarisation. Van Alstein provided three suggestions for pedagogical practices when dealing with controversy in the classroom. First, tailor your approach in function of what is happening in the classroom. Second, defuse harmful forms of polarisation, but keep the space as open as possible. And finally, a good conversation often starts with a good question.

Would you like to read more about Maarten Van Alstein’s work on Controversy & Polarisation in the classroom? You can find the full publication here.

About the Author: Alicia Rijlaarsdam