We are pleased to present the case on The Legacy of Cecil Rhodes at Oxford as the first in a series of in-depth studies for the Contested Histories Initiative. We hope that this series will provide insights and lessons learned for engaging with and addressing instances of disputed historical legacies in public spaces. 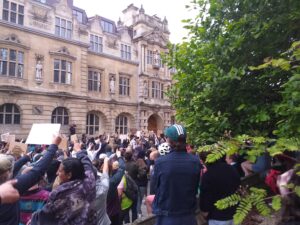 Rhodes at Oxford is an iconic case in our catalogue of more than 160 cases globally. It relates to the #RhodesMustFall movement, which began at the University of Cape Town, South Africa, and saw a prominent statue of Cecil Rhodes defaced and removed from the campus in 2015. The movement has since spread to the University of Oxford, UK, where Rhodes’ legacy remains an unresolved point of contention. Rhodes, who received an honorary Doctorate in Civil Law from the University in 1899, was a principal figure in the diamond mining industry in South Africa, frequently divided public opinion–both in his own time and today–for his racist views and imperialist morals.

His legacy is most visible at his erstwhile college, Oriel, where a statue to his honour decorates the building on High Street. Additionally, the prestigious Rhodes Scholarship and Rhodes House, where the scholarship is administered, also bear his name. Rhodes also acted as a benefactor to the University of Oxford, leaving £100,000 to the College in his will.

Movements that call for the removal of objects such as statues, often referred to as fallist movements, use the object as a symbol to raise awareness of historical injustices and campaign more broadly for social justice. The RMFOxford movement is “determined to decolonise the space, the curriculum, and the institutional memory at, and to fight intersectional oppression within, Oxford”, stating that “statues and symbols matter; they are a means through which communities express their values. The normalised glorification of a man who for so many is a symbol of their historical oppression is a tacit admission that – as it stands – Oxford does not consider their history to be important.” The movement garnered national media attention and led to heated discussions over historical revisionism and the erasure of history, the complexity of historical figures and embedded racism and colonial legacies in UK society. 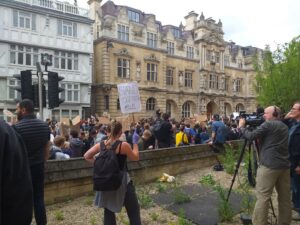 Most recently, the #BlackLivesMatter movement in the US and across Europe has stimulated momentum for many disputed statues and monuments that pay homage to historical figures associated with colonialism, imperialism and slavery, and which symbolise systemic racism. Rhodes at Oxford is no exception. After the statue of Bristolian slave trader Edward Colston was toppled by protestors, dragged through the streets and dumped in the harbour on Sunday June 7th, a sign was taped to the doors of Oriel College, warning: “Rhodes, you’re next”.

Protests were held at Oriel on Tuesday June 9th (pictured above), calling (again) for the removal of Rhodes. Despite claiming to be “deeply committed to equality”, Oriel’s Governing Body remains evasive, stating that they “continue to debate and discuss the issues raised” by the continued presence of Rhodes’ imposing legacy. Meanwhile the chancellor of the University accused student protestors who receive the Rhodes Scholarship of a “bit of hypocrisy”.

Additionally, similar discussions over various colonial and slavery related legacies at higher education institutions and in wider public spaces in the UK have been held in recent years. For example, the legacy of eugenicist Francis Galton at University College London, and inquiries into historical links to slavery at the Universities of Glasgow and Cambridge have garnered media attention. The movement is also present in the United States with legacies of benefactors and historical figures connected with Yale, Harvard and Stanford coming under consideration. Similar fallist movements have also been launched, for example GandhiMustFall at the University of Ghana, LeopoldMustFall in Belgium, and FaidherbeMustFall in France, as well as movements calling for street names to be changed, for example those referencing slave traders in Le Havre, France, Glasgow, Scotland, and Liverpool, England.

Drawing on more than 160 case studies from Europe, Asia, Africa and the Americas, the Contested Histories project seeks to identify underlying causes for disputes dealing with monuments, memorials, statues, street names, building names and other physical markers of historical legacies. The aim is to distil “best practices” for decision-makers, policy advisors, civil society activists, scholars and other stakeholders faced with similar disputes in their communities or societies. The case studies will also inform the development of educational resources that address disputed historical legacies and highlight the complexity of historical memory.

Call for images: photographs documenting disputes are central to our research and the team is often constrained by images that are copyrighted. If you have an image of a contested monument, street name, statue or other physical representation of historical legacies in public spaces, please share them with us! Appropriate credits will be given.

For more information and to share images, email info@ihjr.org.

About the Author: Grace Sahota