Football enjoys a fan base bigger than that of any other team sport, with millions of people passionately following local, national, and international competitions. Thanks to its accessibility (you only need a ball and two goalposts to play), football is played by professionals but also amateurs of every age, religion and social class; although it still appeals primarily to men, more and more women around the world are getting attracted to it, both as players and viewers. The “Football makes History” project, launched in 2018, wants to capitalise on this sport’s popularity and make football’s history and cultural heritage powerful educational tools for the promotion of equality and social inclusion. Funded by the EU Erasmus+ programme, “Football makes History” sees EuroClio co-operating with various partners from the football, heritage and education worlds, involving history educators and youth workers from across Europe. Different initiatives have already been implemented, such as staff training meetings, while the project’s website has recently been launched. Soon, learning activities for formal education and a toolkit for non-formal education will be made available in response to the needs of educators, assessed through an international survey run in early 2019. According to this survey, European educators, both in formal and non-formal education, have often witnessed cases of discrimination (particularly xenophobia), and they believe that football’s history has the potential to foster tolerance and respect. This is also the opinion of Professor Gijsbert Oonk from the History Department of Erasmus University Rotterdam. Professor Oonk, director of the “Sport and Nation” research programme and holder of the Jean Monnet Chair on Migration, Citizenship and Identity, is the Academic Advisor of “Football makes History”. He will show us how football history can help promoting positive values among the younger generations, and will provide us with tips and examples for formal and non-formal educators.

How to include football history in the curriculum

Football history can offer an alternative approach to the teaching of colonialism. Generally, educators support their instruction with world maps showing countries in different colours according to which European state colonised them. Football may offer a less conventional route into the subject that would allow students to be more actively engaged. For example, students could be asked to look at pictures of national football teams and guess where the players and their parents were born. This approach would be very effective in a country like France, whose national team won the 2018 World Cup and was composed by fourteen players of African origin out of twenty-two, connecting the history of colonialism with the history of migrations. Besides the famous French case, there are plenty of examples of teams whose members were born in different countries from the one they play for, as Professor Oonk explains in his inaugural lecture. Including football history in lesson plans about colonialism would allow educators to discuss relevant issues such as integration and citizenship, thus ensuring that the teaching of a complex past phenomenon does not overlook its current implications and long term consequences.

If in the case of colonialism, football history can provide a starting point for the teaching of the past, in other cases it can enrich existing narratives like, for example, the history of the First World War. A series of episodes known as “Christmas truce” occurred in December 1914 along the Western Front. Hostilities had reached a stalemate and during the Christmas week soldiers from opposite sides came out of the trenches and met in no man’s land, fraternised, exchanged gifts and, in some cases, played football. There are various accounts of matches between British and German troops that, although not always accurate and reliable, have persuaded historians that during these unofficial ceasefires enemy soldiers did meet and play football on a few battlefields in the Flanders. Learning about these episodes can help students familiarise themselves with the geography of the conflict and with the reality of life in the trenches. Moreover, the Christmas truce constitutes an example of humanity in the midst of atrocity, and can contribute to promoting peace and mutual understanding.

Although football history includes various episodes of tolerance and solidarity, sometimes such values did not prevail and this sport became characterised by different forms of discrimination, like racism, xenophobia, antisemitism and sexism. Today, it happens both on the terraces during matches when, for example, fans make monkey gestures, and on social media, where the phenomenon is amplified. Fare Network, one of the partners to the Football Makes History project is working hard to report on and combat such occurrences. 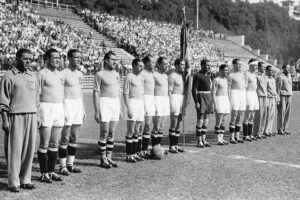 Unfortunately, intolerance has long been present in football, but Professor Oonk argues that it should not be downplayed or ignored. Even the most negative episodes from football history have the potential to spark discussion about various topics, such as nationality and identity, while at the same time expanding and deepening student’s comprehension of complex historical phenomena. For example, history educators could integrate the teaching of Italian fascism with the history of Italian football in the 1930s. The country’s national team winner of the World Cup in 1934 included some players who were born in South America from Italian immigrants; nevertheless, nobody questioned their Italian nationality and right to play for Italy. As anti-Semitism grew and racial laws were implemented in 1938, members of the Italian Jewish community who had become prominent in football, such as Renato Sacerdoti, President of AS Roma and architect of the team’ success in the 1930s, were persecuted and arrested, despite remaining very popular among Roma fans. The case of football during Italian fascism is just one example of how educators can use the history of this sport to explore concepts of nationality, identity and loyalty, and to reflect on the discrimination and exclusion of minority groups.

Football history has a lot of untapped potential to promote inclusivity and tolerance by providing positive examples and role models, and by serving as a basis for discussing current topics. Moreover, including football history in the normal history curriculum can help raise students’ interest in the subject, as Professor Oonk’s experience confirms. This is why EuroClio is currently preparing teaching materials for formal and non-formal education, with useful resources soon to be made available on the project’s website. However, as all educational tools, football history has some limitations. First, its use is limited to the teaching of recent history. Although some forms of football already existed, it is during the twentieth century that this sport became as popular as it is today and that its history started to be documented systematically. Moreover, much like films and video games may also fail to capture some pupils’ attention, football history too does not always improve engagement and participation in the classroom because not all students are interested in the sport in first place. Therefore, students preferences should be taken into account by educators before including football history in the curriculum. Done right, however, football history can be a very useful tool to highlight issues of historical importance that are fit for history curricula.

Written by Cecilia Biaggi, postdoctoral trainee at EuroClio and a Marie Sklodowska Curie Researcher in the LEaDing Fellows COFUND program at Erasmus University Rotterdam. Cecilia is particularly interested in minorities and nation-building, political history and education. A special thanks also to Professor Gijsbert Oonk for input to this article.

About the Author: Cecilia Biaggi