Earlier this month a statue of a former Soviet general was removed from a municipality in Prague resulting in protests by the Russian minority in the Czech Republic and anger from Moscow. In March 2020, the Virginia legislature voted to allow municipalities the right to remove statues, overturning a previous state law, essentially paving the way for the city of Charlottesville to relocate a statue of the Confederate general, Robert E. Lee, which in 2017 was the focus on violent protests resulting in the death of an anti-protester and two police officers. In Australia, plans to celebrate the 250th anniversary of Captain Cook’s landfall in Botany Bay this month originally included erecting a new statue to him, which was met with immediate opposition.

April 18 is the International Day for Monuments and Sites. The day was originally proposed by the International Council on Monuments and Sites (ICOMOS) on 18 April 1982 and approved by the General Assembly of UNESCO in 1983. The aim is to promote awareness about the diversity of cultural heritage. Each year there is a theme, and in 2020,  ‘Shared Cultures, Shared Heritage, Shared Responsibility’ , which they say is ‘intentionally provocative’. Certainly monuments can contribute to a sense of shared heritage in societies where a monument reflects their values and understanding of the past. In such cases members of a community have a shared responsibility to maintain and conserve a monument. But what of cases where monuments do not represent those values and, in a case like the Lee statue in Charlottesville, cause great divisiveness within the community? Or in the case of the Cook statue, can one say that this monument represents a shared heritage of the Aboriginal people and those of the settlers that followed Cook’s landing? The monument may symbolize a shared heritage but certainly not in the positive meaning. Where then does the responsibility lie to maintain and conserve?

Monuments are not mere blocks of stone or bronze figures erected to beautify a park or cityscape. They are tangible representations of historical legacies that reveal a great deal about the fabric of the societies in which they stand. They can serve as a trigger for protest and violence or as catalysts for reconciliation and social cohesion.

In the first instance, contestations over monuments are rarely about the object itself but rather about underlying tensions dividing a community, be they based on unaddressed historical grievances, the sense of injustice from marginalised communities, manipulation for partisan political purposes, protests over economic disparities or other grievances. The fall of the Cecil Rhodes statue at the University of Cape Town in South Africa in 2015 is a case in point. Students and faculty were frustrated by the university’s slow pace in transforming the curriculum, reforming hiring practices, dealing with racism on campus, and addressing students’ complaints about tuition fees. The statue of the 19th century colonial-era businessman, an unapologetic racist, provided a target for their collective grievances, a symbol of the indelible stain of colonialism’s legacy in South Africa. The Rhodes Must Fall movement sparked similar protests around the world.

In the second instance, monuments can contribute to promoting a sense of inclusivity in pluralistic societies. For example, in the Kazakh city of Petropavlovsk the monument of the Kazakh poet Abai stands side-by-side with the Russian poet Alexander Pushkin symbolising friendship between the Kazakhs and the Russians, the two largest ethnic groups in the region. In 2019 the French city of Bordeaux–the second largest port in France complicit in the transatlantic slave-trade during the 17th to 19th centuries—erected a statue of Modeste Testas, a young woman kidnapped in Africa and sold into slavery by a Bordeaux slave-trader, in recognition of the city’s slavery-era legacy and the Afro-Europeans living in France today. Increasingly, monuments such as this are changing the memory landscape of the cities and communities in which they are situated and contribute to a sense of shared heritage.

Do monuments matter? Yes. But what matters more is how controversies over existing and planned monuments can be addressed in effective and responsible ways. Clearly defined principles, evidence-based research, a transparent process of the steps taken, efforts to engage key stakeholders, clear communication with the broader public, all these factors can contribute to the successful integration of a monument into the evolving nature of communities. 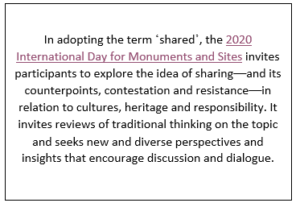 This year the ICOMOS theme of “Shared Cultures, Shared Heritage, Shared Responsibility” recognizes the changing nature of communities in an increasingly globalised and pluralistic world. It  is an agenda well worth pursuing and one that addresses an age-old challenge: times change, people change, monuments remain. It is our responsibility both to preserve and to adapt our heritage landscapes in ways that respect the past while reflecting the nature of our ever-evolving communities.

Drawing on more than 160 case studies from Europe, Asia, Africa and the Americas, the Contested Histories project seeks to identify underlying causes for disputes dealing with monuments, memorials, statues, street names, building names and other physical markers of historical legacies. The aim is  distil “best practices” for decision-makers, policy advisors, civil society activists, scholars and other stakeholders faced with similar disputes in their communities or societies. The case studies will also inform the development of educational resources that address disputed historical legacies and highlight the complexity of historical memory. For more information contact info@ihjr.org

About the Author: Marie-Louise Jansen