The Interwar Period Through Various Perspectives

The Interwar Period Through Various Perspectives

From 18-19 November 2017, EuroClio ambassador Ineke Veldhuis-Meester attended the international congress “Fundamental rights in democratic and totalitarian European countries during the interwar period 1918-1939” in Tallinn, Estonia. At the congress Ineke’s role was two-fold: she gave both a lecture on the experiences of the Dutch during the interwar period, and collected many different impressions and interpretations from various international participants to create a well-rounded report from many different perspectives.

In the beautiful 19th Century building of the Tallinn Reaalkool, the first day of the congress was filled to the brim with general lectures on 1) the reception of the October revolution in Estonia in the context of human rights, 2) reflections on the early won Estonian Women’s Suffrage, 3) Interwar Poland and 4) Interwar Finland. Moreover, twelve lectures/workshops in two rounds were given on the different countries’ experiences of the period. These workshops were so well received, that people complained of not having had the opportunity for a third round of lectures to hear how this period is perceived and taught in more EU countries!

The full programme of the congress is available here.

Below you can find the international participants’ reports on the lectures/workshops they visited.

As the VIIth Estonian history teachers’ congress was dedicated to totalitarian European countries during the interwar period 1918-1939, the view on Lithuania and Latvia as the Baltic neighbours of Estonia was of particular interest.
Despite differences in detail, both countries went through a similar development from a newly born democratic Nation state in the wake of World War I to an authoritarian state up to the mid-1930ies. Nonetheless, the interwar period is in both countries perceived as an important moment in the national awakening. As Ansis Nudiens in his lecture on “The national issue in the Latvia’s history textbooks” explained, national historiography during the interwar period (and well beyond) blanked out the strong influence by the German speaking nobility and Russian rule under the tsarist regime on Latvian history in order to create a national narrative.

Simona Stankutė and Sonata Džiavečkaitė lecturing on “Democracy and dictatorship in Lithuania” put emphasis on the perception of Antanas Smetona, the first and last president of independent Lithuania during the interbellum years. They explained that Smetona is nowadays mostly judged by his merits for the affirmation of the Latvian state and less for his authoritarian rule.

Can Norwegian newspapers in the interwar period be used to illustrate general reactions to Nazi policy? In short, the answer is ‘certainly’! Having outlined the main points of Norwegian history in the interwar period, Kristen Meadows, who works as a pedagogue in the Center for Holocaust and Religious Research in Norway, presented the participants with a series of short articles from different Norwegian newspapers on Nazi policy. The newspapers used to be either owned by or closely connected to different political parties. The articles dating from 1933 to 1939 clearly showed a development in opinion. Consequently, this facilitated a very lively discussion in the workshop to clarify the general reactions to Nazi policy.

The first workshop I attended, “Norwegian newspapers in the interwar period – reactions to Nazi policy” was prepared by Kristen Meadows from Norway. First, Kirsten gave us short speech about Norwegian political situation in the interwar period. Then we worked with the historical sources – articles from 3 well known newspapers from that time: Dagbladet, Aftenposten and Arbeiderbladet. We had to answer a few questions about the newspapers attitude to Nazi policy. The general question for the workshop was: Is there something from the interwar period for Norway to be ashamed for? The conclusion was that there is nothing to be ashamed of, but there certainly are issues that Norway has to critically asses This workshop was very well organised and it was very interesting.

For the second workshop that I attended, The Danish interwar Period Uncovered Through Competitive Exercises, was prepared by Trine Loo and Kristian Arentsen from Denmark. The workshop was divided in four chapters: 1. A brief introduction to Danish history before, during and after WWI, 2. Competitive exercises – case: “The Kanslergade Agreement”, 3. Collective memory, 4. Summary of the workshop. The most interesting part was the second where we worked with texts in which we had to find answers for four group of questions regarding the Kanslergade Agreement. We had to find the answers very fast! As I wrote, it is a competitive exercise: whoever is the fastest (including the right answers) is thewinner. I think every student would like that kind of exercise! 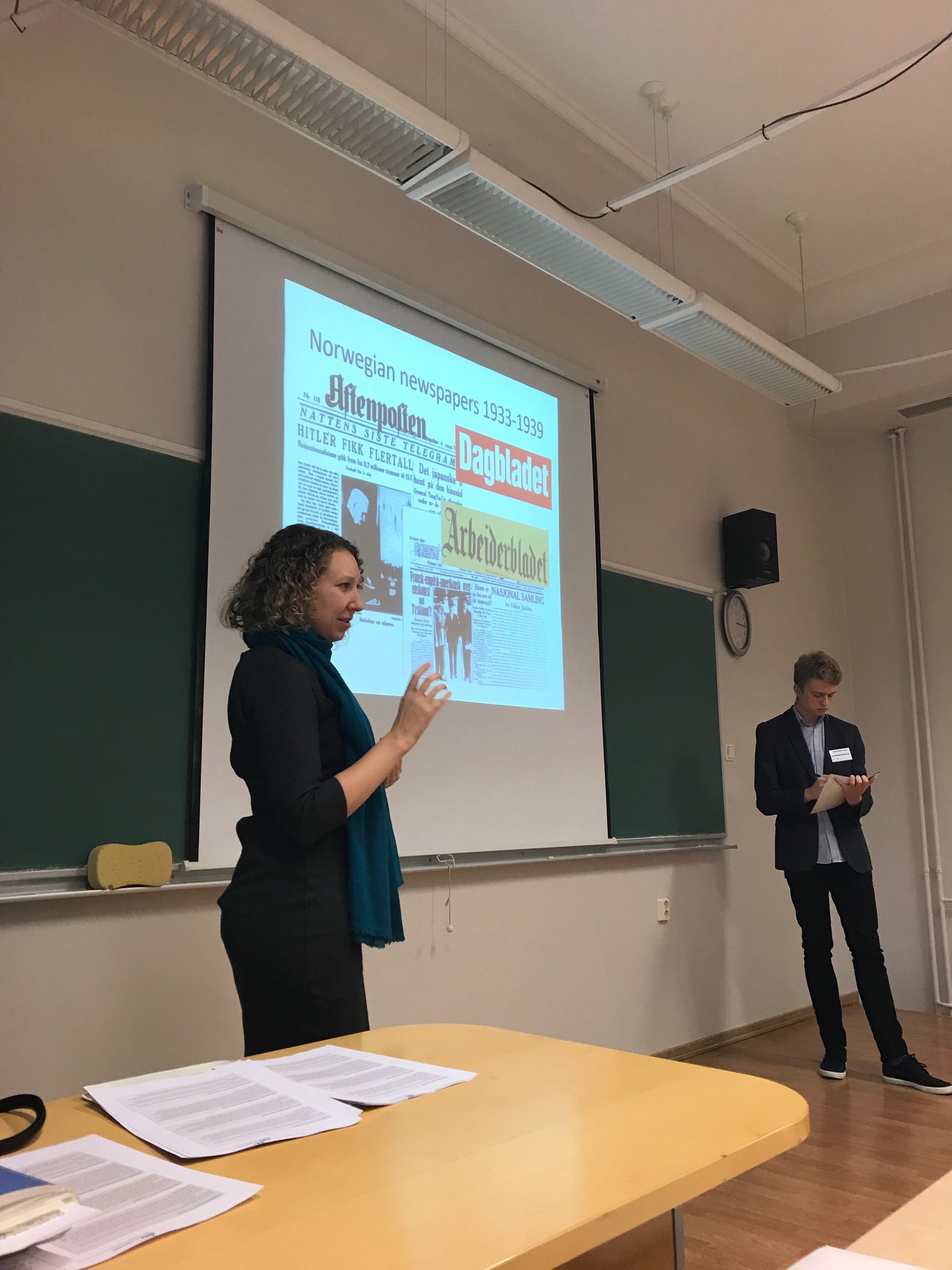 Workshop on the interwar newspapers of Norway by Kirsten Meadows

Ineke Veldhuis-Meester: The Dutch Stayed Out of the War…

(A workshop of good questions)

Ineke, as always, raised several good questions. Why did the Dutch stay out of the war? How was it possible? Was it an advantage or disadvantage? What were the social changes in the Netherlands during the interwar years? How could the Dutch avoid the dictatorship?

The Netherlands were a stable paternalistic and open society. Characterised by religious tolerance, sense of citizenship, a strive for equality and the possibility to control the state. When the young European democracies were in danger, when dangerous ideologies gained ground, the Dutch could avoid the fate of Eastern and Central Europe. They could avoid their fate, because of their different attitude, which rooted deeply in their traditions and culture.

For us, people in Eastern and Central Europe, that is the lesson we should learn from the Dutch. But in many of our countries we have, again, different experiences. We can see, again, the contrary.

Let’s learn from the Dutch!

The lecture by teacher Nina Våntånen about Lapua’s movement was very interesting and comprehensive. The interwar period in Finland is a subject of little consideration in Lithuanian textbooks. It was therefore helpful to learn more about how this movement was

born and spread in Finland. It was very interesting to me that in the interwar period, however, the Finns managed to resist the undemocratic movement of Lapua and preserved democracy. Many European states in the interwar period – including Lithuania – have moved from a democratic system to a dictatorship, while the Finns have remained loyal to democratic values. And of course the Finnish state’s political evolution has evolved differently from Lithuania, Latvia and Estonia, which were chosen dictatorial regimes.”

Ineke Veldhuis-Meester from the Netherlands reports:

In his workshop “The central lecture on Narratives from the Polish history teaching on the Interwar period in Europe”, Jacek Staniszewski from Poland painted a picture of ‘a Poland with two tribes,’ who tell the same facts, but frame them differently. This is best seen not in textbooks, but in popular magazines. Jacek showed us the controversies of ‘the two tribes’: on borders, the Jewish issue, the assassination of the 1st president, The May Coup in Wilno and Pilsudski, and the current nostalgia to the good old times of the twenties and thirties. All noticed by both, but interpreted opposing perspectives.

The second workshop I attended “‘activities run’ through Hungary’s Age of Trauma and Contradictions”, was energetically managed by Zsolt Vodli. After every round of skilfully and attractively presented information, the participants had to fill out a short rehearsal test as given to his Hungarian class; the check was handled by Zsolt efficiently, so that we saw what happened under Horty’s regime. What struck me most was how Hungary had been beaten by the consequences of the lost war: a post-Trianon Kingdom without a king, and ruled by an admiral without a sea, a country with around 70% of its territory lost and 31% of its fellow country men living outside its borders. How heavily the lost war drew on the people is felt until today.

Last weekend I had a chance to visit Estonian capital Tallinn to experience congress of Estonian history and civics teachers. The warm welcome at the headmaster’s office on Friday’s evening was a pleasant kick off of the whole event.
Looking back at the event I’m still amazed by the organisation, by the organizer and all the students participating. The high school students have been fantastic! They have been able even to consecutively interpret workshops for their Estonian teachers from English into their own language.

Now thinking about the two workshops I attended, well, I was pleasantly surprised and unexpectedly satisfied. My first experience was with Miguel Monteiro de Barros’ presentation about Portuguese path to totalitarianism designed as mini lecture and well crafted. Handouts and audiovisual aids were masterfully mixed together. Miguel’s presentation skills and smartly chosen keywords cemented the facts in my memory and I’m still able to recollect most of this mini lecture’s content and I guess I won’t forget 3 Fs (Fátima, Football, Fado).

My second experience was with Zsolt Vodli’s Interwar years, which compared to Miguel’s was a completely different approach. This workshop was full of activities and as dynamic and innovative as it gets. One feature of the workshop struck me and stayed – it was the irony and paradoxes of interwar regime. This perspective is rare, but I highly appreciate and those contradictory phenomena still keep me reconsidering rhetoric and actions – what is being said and what is being done.

Sadly, I have to address design deficiencies also. Mini lectures and workshops are a good format, but the time for them was limited and too short with little time to discuss presented approaches in depth. There were many workshops and mini lectures (about 20) which I wanted to attend, obviously, because of the presenters and their crafts, but I had to choose two only, which is another point that I would rethink for such event.

All in all, I’m grateful for such event. These events are great for exchange of ideas and experiences and enrich my own set of practices. 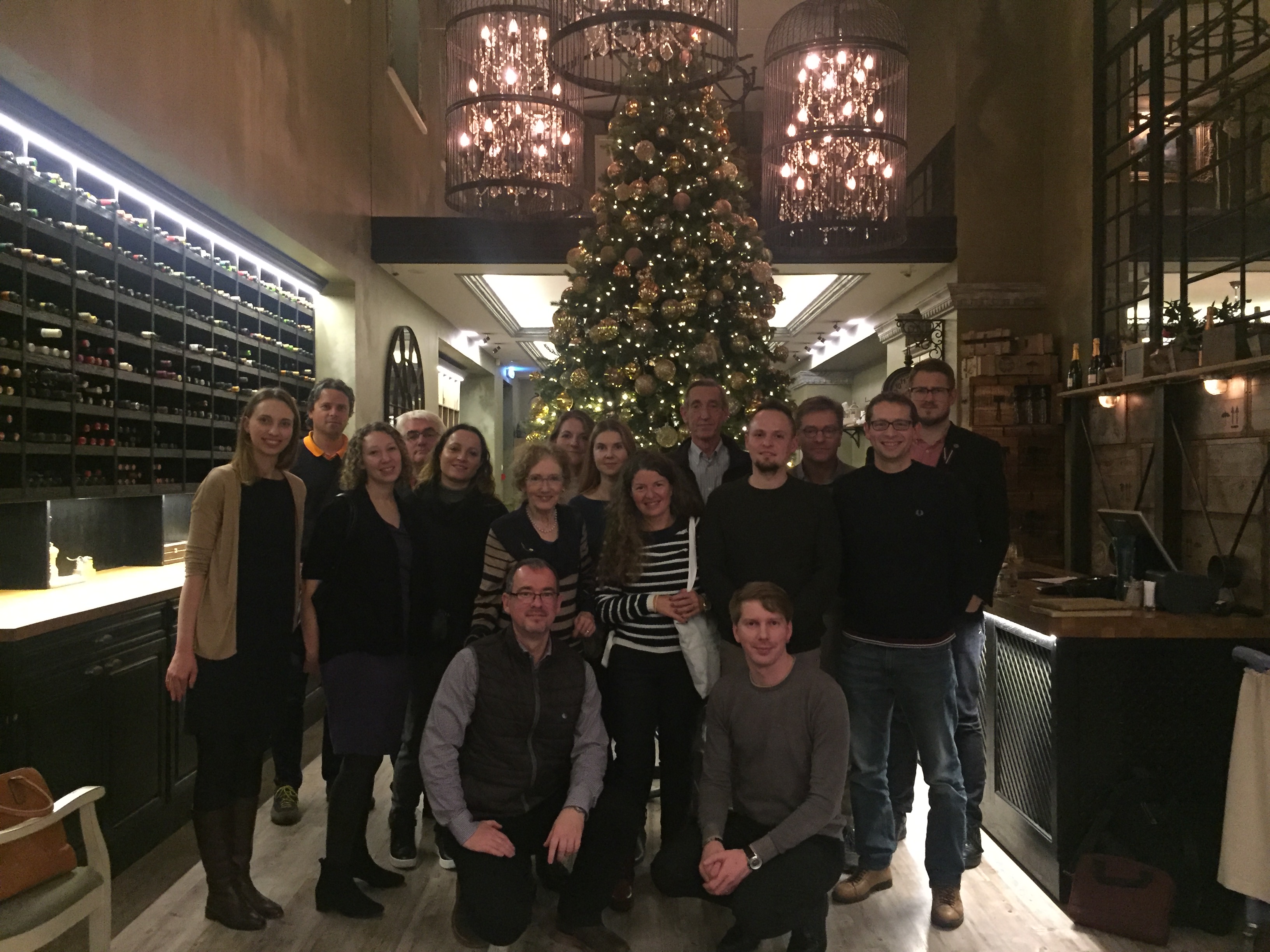 International participants of the congress