This is the first part of a blog post on Marios Epaminondas’ study visit to Seoul, Korea, which took place from 22-28 July 2017 (N.B.: In this report the terms Korea, Republic of Korea and South Korea are used interchangeably unless stated otherwise). It is the fourth article in a series of reports and blog posts related to the project “Dealing with the Past in History Education”. The previous articles, on the study visit to Cape Town, can be found here.

The study visit took place within the framework of the Northeastern Asian History Foundation (NAHF)-EuroClio joint Conference entitled “Multiperspectivity and Tolerance in History Teaching”. This gave opportunities for interaction with a variety of actors who are working or cooperating with the Foundation. These included members of the Board and the staff of the Foundation, researchers and history teachers. At the same time, the structure of the programme, which was very tight and demanding, limited the possibilities for meetings with individuals who were not part of the activities prepared by the Foundation. In addition to the information gathered from the activities prepared by the Foundation, the available, unstructured time was used for visits to Museums. This provided a broader understanding of the social mechanisms of memorialization in the South Korean Society.

A brief calendar of activities can be helpful for establishing the context within which data for the compilation of the Report were gathered.The EuroClio delegates had their first meeting at Seoul on Sunday the 23rd of July 2017. We got to know each other and the representatives of the host organization and we established a common code of contact. On Monday 24th five Parallel Teaching Workshops were held by EuroClio delegates at Choong-Ang High School for students 15-17 years old. In the afternoon a round table discussion on “Issues and Challenges of History Education in Europe and South Korea” was held. On Tuesday 25th the main body of the NAHF-EuroClio International Conference “Multiperspectivity and Tolerance in History Teaching” was held. It included three sessions: 1. Conflicts over History and History Education 2: Citizenship and History Education, 3: One History, Multiple Perspectives. 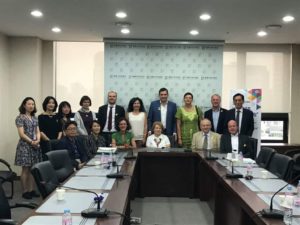 On Wednesday 26th and Thursday 27th we had the opportunity to be acquainted with the history and the culture of Korea in a more hands-on way. On the 26th a field trip with a tour guide was organized to the De-Militarized Zone (DMZ) separating South and North Korea. At the morning of the 27th we had the chance to participate in a Tea Ceremony reflecting traditional Korean modes of social interaction which are, to a large extend, not practiced by new generations of Koreans. The day was concluded with the participation to a teacher training seminar with Korean history teachers hosted by Dokdo Training Institute. The session had two lectures from EuroClio delegates followed by a fruitful discussion with Korean teachers about issues and challenges in History Education in Korea and Europe.

The programme which was organized by the NAHF was enriched with visits to three important Museums undertaken by my own initiative. On Sunday the 23rd, along with a group of EuroClio colleagues, we visited the “National Museum of Contemporary History of Korea”. On Friday the 28th, I visited the “Seoul Museum of History” and the “National Folk Museum of Korea”. In addition to that, I included in my workshop with the students at Choong-Ang High School an activity to gather student’s opinions on “Why we should learn History”. I also had an in-depth interview with Assistant Professor Mrs. Mimi Lee, from the College of Education Hongik University at the time slot between the end of the Round Table Discussion on the 24th and the official dinner the same day. Finally, I used the unstructured time of the programme to hold informal discussions with EuroClio delegates and representatives of the Foundation about the issues related to this report. Their support and ideas were very valuable. It’s worth noting that direct conversations with Korean history teachers were extremely limited due to language and time barriers.

The information gathered during the study visit was selected with view of supporting the extraction of answers to a basic question, which is analyzed in three sub-questions:

Basic Question: How are the “difficult parts” of Korea’s past dealt with?

(a)Which parts of Korea’s past are considered difficult and/or sensitive?

(b)What educational programmes exist which deal with the past?

(c)What is the notion of good history education and how does it contribute to dealing with difficult past?

Data for the report were drawn from:

(b) Notes from the discussions which were held during the conference

The historical issues considered “difficult” in South Korea are mainly related to the way its (historical) relations with Japan and China are presented officially, remembered and taught. Challenges also exist when organizing the education of the children of defectors from North Korea. In the former case, there is an effort initiated from the South Korean side –yet to be fruitful- to establish “shared perceptions” between Korea-Japan-China. In the latter case, there is an effort for the re-education of defectors’ children so they can adapt easier to the South Korean society. Professor Lyu Seungreul from Kangwon National University, commenting on the typical pending historical issues in Korea, referred to the following: “problems with history textbooks and education, land and territorial disputes, controversies over worshiping Yasukuni Shrine, apologies and compensations for Japan’s invasion and domination in terms of such activities as imprisonment, conscription and “comfort women” for the Japanese army and historical conflicts with China”(p. 39). The Yasukuni Shrine is a Japanese Shinto shrine to commemorate those who died serving the Emperor of Japan, installed in Seoul by Japanese authorities and considered by Koreans as one of the symbols of Japanese oppression. The issue of “comfort women” and the problems describes in this context, are related to the fact that the official versions of history in the region espoused by Japan and China, is incompatible with the Korean version of history. The Korean side aspires to a dialogue which will lead to “shared perceptions” and joint textbooks which will included the rectified version of history.

This reference by Professor Lyu Seungreul, reflects potently the omnipresent fact that the “historical issues” are interrelated to current political antagonisms.

According to the presentations of the Korean speakers, the way in which Japan is currently presenting and interpreting the period during which it held Korea as a colony (1910-1945) is highly problematic. It was inferred by the speakers that the Japanese official stance is that the Japanese colonial rule brought about modernization, while it completely obscures the suppression that Korean people went through by Japanese authorities. The most sensitive part of the suppression is the “issue of ‘comfort women’ compulsory mobilized by Japanese army” (Lyu, p. 39) as sex slaves. South Koreans call, through governmental and civil society initiatives, for a dialogue. So that a narrative, which includes both modernizing attempts and suppression practices by the Japanese authorities, can be jointly established.

In addition to the above, historical controversies are unearthed due to the on-going dispute about the island on Dokdo. Japan is laying claims on the island whereas Korea is working towards the collection of historical evidence which underpins its Korean past and demonstrates the irrefutable ownership of the island by Korea. Another issue of historical/geographical character concerns the name of the Sea between Korea and Japan. Korea considers the right name to be “Eastern Sea” whereas Japan calls it “Japan Sea”. On this issue possibilities for dialogue are more limited since historical claims are directly linked with issues of sovereignty. Each side is working for the promotion of their claims trying to convince third parties about their validity. A way to measure success in this effort, according to information gathered from NAHF staff is the increase in the percentage of maps worldwide presenting the sea between Korea and Japan as “East Sea”.

It is obvious that the current political tensions between South Korea and Japan are feeding the debate/conflict over history. Vice versa, the historical issues under dispute impede the dialogue on current issues from being fruitful. From the statements made by Korean colleagues, as well as from the narratives presented in the National Museum of Contemporary History of Korea and the Seoul Museum of History, there seems to be openness within society to discuss critically various issues related to modern history of Korea (especially the developments within South Korea after the war of 1950-1953). However, such dialogic approach is not easy to be adopted with the official Japanese claims about their rule of Korea. As Assistant Professor Mimi said, there are debates from different points of view on many issues of modern history but “when it comes to confronting Japanese claims, we stand as one”.

A quite particular public action encapsulating vividly the trauma existing within Korean society from the Japanese rule concerns the fate of a landmark building constructed during Japanese colonial period: the Japanese Government-General Building. It was erected in the Gyeongbokgung Palace during 1916-1926 at the expense of the Palace’s architectural integrity. This building served, after Korea’s liberation, as the main building of the Republic of Korea central government (1948-1982) and then it housed the National Museum of Korea. On August 15th, 1995, on the occasion of the 50th anniversary of the Korean liberation, the building, which was considered a symbol of the Japanese rule, was torn down. At a plaque outside the Seoul Museum of History this action’s rationale is explained like this: “Its demolition was part of an initiative to remove the vestiges of Japanese colonial rule and the restoration of the national spirit of Korea”.

Tensions exist also with the Chinese presentation and interpretation of ancient/pre-modern History. Mrs. Sun Joo Kang explained in her speech that “Koreans consider themselves the heirs of Koguryo state which occupied much modern Northeast China from the seventh to eleventh century (…). However, Chinese historians claim that Koguryo is part of Chinese history”(p.71). In an unofficial discussion, a Korean colleague explained that Koreans are bitter by the Chinese attempts to “steal their history”. As the colleague pointed out, it is unquestionable that the areas which were under the control of Koguryo Dynasty, are currently Chinese territories. However, it is not right on behalf the Chinese authorities and historians to deny the fact that these areas were once ruled by a Korean Dynasty. Researching the ancient history of the region of Korean Peninsula and beyond to locate and highlight its Korean heritage are among the activities undertaken by Korean researchers to support the abovementioned effort.

This concludes the first part of this report on Marios Epaminondas’ study visit to Seoul, the full report will be uploaded in two parts. More information about the project “Dealing with the Past in History education” is available here.

About the Author: Marios Epaminondas