It’s Saturday morning and instead of drinking coffee cosily at home in a morning robe history teachers are getting on buses in different parts of Estonia to be in Tallinn in time. Why? Because the Estonian History and Civics Teachers’ Association is having its annual autumn gathering in a form of seminar this year. The national history Olympiad is under transition and therefor the input from the teachers was needed to give it a new form and content. Some fresh and innovative ideas were pitched by the teachers and out of these solutions ready for implementation were collectively created.

We also had some friends visiting us from the neighbouring countries – Niina Väntanen from Finland, Edgars Berzins from Latvia and Sonata Džiavečkaitė from Lithuania, with whom we share similar historical background. The focus was on the process of gaining the independence in the beginning of the 20th century, as part of the aftermath of First World War. The participants were quite familiar with the similarities of these processes, which is why we focused on the peculiarities of these events in each country instead. And we found out how ideologically same political forces in different countries can have contrary vision on the countries’ future – because you don’t know the whole story, when you don’t know the background story. That reminded us once more how generalizations can work against us and why studying and researching history in great depth of detail is still very much important.

As an interlude of the seminar, teachers went outside to take a walk in the neighbourhood in the early snow, accompanied by a historian whose aim is to inspirit history in the common city streets; his so-called history-hikes in different parts of Tallinn are gaining increasing popularity. And history teachers are a tough crowd but nevertheless we managed to learn a few new facts but more importantly we renewed our sight to the city streets that we usually just walk by boredom.

Rejuvenated by the walk it was time to get back to studying.  In history it is easy to stick to narrative and to find events that support it. Our history textbooks usually follow this path, as do our lessons.  But history, while in the making, does not have a clear end-result in sight. It has endless possibilities and even smallest actions can swing it in another direction than we expected or even preferred. This is the theme on which our next topic revolved around – how self-explanatory was gaining the Estonian independence? Supported by wide array of facts and examples our lecturer encouraged us to think outside of the narrative.  Not only was it a great exercise for the mind but it also reminded us why we love history – how interesting, unexpected and rich it can be.

Last part of our day revolved around teaching methods. As it has been in other countries, the passing of 100 years of the beginning of the First World War has increased the interest in the event, as have increased the materials that depict it. Our teachers got an overview what has been made newly available to us and how to use it most efficiently in our classrooms. As an event, the war held tremendous importance in Estonia gaining its independence so heightened attention in it is both needed and welcome.

A great attention was also placed on how to coach students in writing history essays. We’ve seen a decline in student’s abilities to write argumentative, analytical and comparative texts in last 2-3 years. Some cite Estonia’s government decision to revamp the national examination system – history and civics choice exams included essay writing which was thus taught at schools more extensively. New exams don’t include history or civics exam. Others blame changing times and that students are not used to writing long texts due to shorter attention span, lacking additional knowledge that they would acquire from reading books or other such things. We concentrated on another possible reason – teachers ability to guide and aid students in assembling their thoughts and constructing a well-rounded text that shows both their knowledge in history and ability to showcase it in fullest. Through discussion that arose and the tools that were given (and immediately put to test!) there is hope that at least teachers that were present can start to take steps to make a change in developing this very vital and useful skill.

To sum up, the day was packed with different activities and was full of new and useful knowledge. Teachers could mingle and discuss various topics and teaching practices both with colleagues from other parts of Estonia and our guests from Finland, Latvia and Lithuania. We hope that the participants feel inspired by the event and excited to put all that they learned into practice in their respective classrooms!

Professional training for young History researchers and their instructors

On September 1st the president of the Republic of Estonia announced the 18th competition for student research papers in History with a topic “Prerequisites of Estonian independence”. As on February 24th 2018 Estonia celebrates its first 100 years of independence, it is just the right time to begin the search for the core reasons that led to this historic event. Due to Estonia’s history there are two possible starting points – 1918 when the independence was declared and 1991 when the reindependence was gained.

On October 21st a professional training took place with the aim to inspire young researchers and their instructors as well as give them ideas how to discuss the matter on various angles. Among the lecturers there were Ago Pajur from the University of Tartu who spoke about the first president of Estonia Konstantin Päts and his role in gaining independece; Kristi Jõesalu, also from university of Tartu, taught how to maximally use sources and Hagi Šein from the Baltic Film and Media School who inspired participants to investigate Estonian Reindependence through film archives. 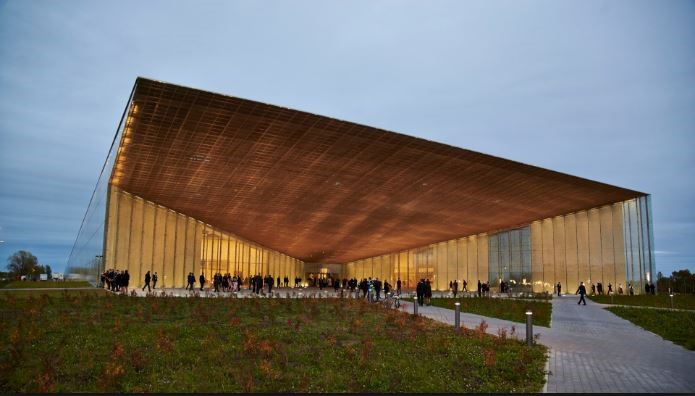 The location of the training – newly opened Estonian National Museum in Tartu – added an extra sense of meaning to the training. When the museum was first established in 1909 the founders couldn’t even imagine Estonia as an independent state. Looking back we can now say that founding of this museum was in a way one prerequisite itself for the independent Estonian state.

Co-ordinators for the competition are Evelin Tiiter and Karolina Antons.