Historians Without Borders in Helsinki

Historians Without Borders in Helsinki

On May 19-20 an international conference of Historians without Borders (HWB): The Use and Abuse of History took place in Helsinki, Finland. A gathering of a diverse group of historians, academics, peace builders, journalists and plenty of interesting people sharing one interest: to promote the use of historical knowledge for peace-building and conflict resolution.

The two day conference started at 10:00 sharp with the opening words from Mr. Erkki Tuomioja, Founding Member of Historians Without Borders Finland and Former Minister of Foreigner Affairs, who laid emphasis on the role of the historian to prevent and give knowledge and experience for solution and mediation in conflicts. He pointed out that he expects that HWB could identify problems and help to resolve them, in addition to create an international network of historians. Meanwhile, Mr. Martti Ahtisaari, former president of Finland, Founder and Chairman of Crisis Management Institute and Nobel Peace Prize laureate, stated that history is too often manipulated and spotlighted the role of history in conflict resolution, together with the historian’s involvement in the creation of tools for conflict prevention, and the importance of historians to be part of peace negotiation processes and in building democratic societies. Shortly after these opening words, we had the incredible opportunity to hear Bernard Kouchner, co-founder and former president of Médicins sans Frontiers, who underscored that borders generate oppression and generate wars.

The last speaker of the day  was Margaret MacMillan, professor of International History at the University of Oxford, whose remarkable words stressed that history is used to mobilize people, to turn people against each other and the misuse of history is something we see everyday and that historians have an obligation to warn about this and make people understand that history has been misused in this way:

“History is not something that is set in stone, it is a mess of debate, is a matter of interpretation and that is the way it should be, it should not be dragged in as if it is a solid peace of evidence on one side or the other.” “Without understanding other, to know what is their remembrance, what is their history, we are depriving ourselves of a very important tool which is what motivates them.” “We need to use history to understand ourselves as much as we need to understand others.”

She brought the perspective that what historians can do, besides bringing understanding, is to challenge dominant myths and narratives within borders. “History is international, history does not stop at borders, history is genuinely international and transnational”. After these gripping lectures, the program also featured several panels and workshops. These sessions provided an excellent forum for dialogue on the current state of the use of history, its narratives and issues concerning conflicts in different parts of the world. On the same day, a publication of the English version of the anthology Use and Abuse of History was launched. The anthology explores different uses and interpretations of history, particularly with regard to their role in the development and resolution of conflicts. 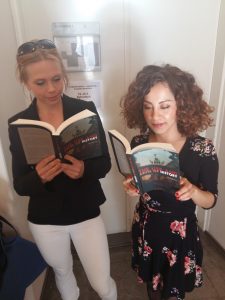 Over the course of the 2-day conference, I had the opportunity to attend two  workshops, one titled “Writing a common history for Israel and Palestine”  and the second titled “Turks and Armenians, 1915 and After”. Both workshops contained fascinating and enganging vital historical information in reference with narratives, understanding and further cooperation in history. In the second workshop featured a very dynamic  discussion that offered diverse opinions regarding the complexity of the Turkish-Armenian relations.

The second day of the conference Ibrahim Gambari, Chairmain of the UN Special Committee on Peacekeeping Operations, brought important insights from United Nations conflict resolution and peacekeeping operations fields from his experience. Meanwhile, Romila Thapar, Honorary member of the American academy of Sciences, gave a fascinating lecture regarding historians as public intellectuals, and she drew attention to the problem of a grand narrative of nationalism and civilization, stressing that “civilizations were interconnected, without borders”, and questioning “whose history we are defending?” As last speaker, Peter Turkson, president of the Pontifical Council of justice and Peace, spoke about the formation of memories through historical events mainly from the past history of the church and on its present-day approach on peacebuilding and reconociliation.

The conference made abundantly clear that there is an interest to improve the use of history and to promote the use of historical knowledge for peace-building and conflict resolution.This is why, a declaration on the establisment of the international network of Historians without Borders at the final session of the conference was finally ammended. It was achieved through diverse propositions with the aim to promote HWB objectives in international cooperation. The agreement is to continue working together in order to:

“The program was excellent with interesting discussions and sometimes even heated debate about use and abuse of history. Unfortunately, education wasn’t that much on the agenda as it should have been. Historian without borders seems a great initiative and even a needed one, considering the distorted way history is being used in identity politics today, to build barriers between “us” and “them” But the academic field should somehow find connections with educators at the grass-root level. Hopefully we in Euroclio will find a way to contribute to the new organisation’s work and vice versa. Our outspoken aims are more than compatible.”

Margaret MacMillan Professor at the University of Oxford

Peter Turkson President of the Pontifical Council for Justice and Peace

1917 in Finnish and Russian Historiography

Writing a Common History for Israel and Palestine

Turks and Armenians, 1915 and after

Colonial History or History of Colonialism

The Presence of History in East Asia: Why Can´t Bygones be Bygones?