Best of the Web in History: November and December 2015

Best of the Web in History: November and December 2015

This is the first post in our new “Best of the Web in History” series. The posts contain a roundup of interesting articles and useful tools to teach history in an online or digital setting.

ActiveHistory designed a decision-making simulation tool about the Roman Empire. “This simulation is designed to provide students with an engaging, enjoyable and rigorous introduction to Imperial Rome. As they journey around the virtual landscape, they will learn about the main personalities and chronology of the Empire through the “Emperors” worksheet, and learn about the main achievements and inventions of Rome through the “Roman Holiday” worksheet. Ideally, students should complete both worksheets, but they work as stand-alone resources and so are very flexible: for example, you may wish to set half of the class on one worksheet, and half on the other. Each worksheet comes with suggested extension tasks.” The ActiveHistory website includes many other online teaching tools, about all kinds of subjects and age ranges.

The Colosseum! What else left over from history education?

This article written by Alexander S. Khodnev addresses history education reform in Russia. “The reform of history education in Russia aimed at promoting the growth of interest in history, the formation of critical thinking, and the emergence of solid knowledge about the country’s history and world history. Much has already been achieved. Nevertheless, one cannot speak of sustainable notions of history for school children that could help to form a collective identity. In recent years, we can see a reverse process, back to archaic consciousness, based on distorted historical memory.” Continue reading here.

Digital Atlas of the Roman Empire

Scholars from various universities and institutions have created a Digital Atlas of the Roman Empire. More information about the project to digitize the Barrington Atlas can be found in this blog post. The aim “has been to create a static (non-layered) map of the ancient places in the Pleiades dataset with the capacity to serve as a background layer to online mapping applications of the Ancient World. Because it is based on ancient settlements and uses ancient placenames, our map presents a visualisation more tailored to archaeological and historical research, for which modern mapping interfaces, such as Google Maps, are hardly appropriate; it even includes non-settlement data such as the Roman roads network, some aqueducts and defence walls (limes, city walls). Thus, for example, the tiles can be used as a background layer to display the occurrence of find-spots, archaeological sites, etc., thereby creating new opportunities to put data of these kinds in their historical context. The ancient places and their names have been rendered on a topographical map created from elevation data, originally from the Shuttle Radar Topography Mission (SRTM) project at NASA. The map itself is created as a tiled mapset in the Spherical Mercator projection (EPSG:3857), used by most webmapping services. It is compatible with Google and Bing street and satellite maps, OpenStreetMap, and can easilly be implemented with a javascript application programming interface (API), such as Google Maps and OpenLayers API. Work has taken two different forms: 1) preparation and improvement of the data; and 2) the rendering of the digital map.” 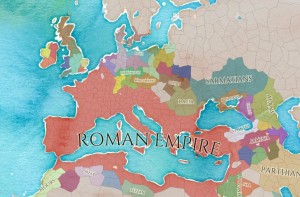 Chronas is a history project linking Wikipedia and Wikidata with a chronological and cartographical view. The result is a stunning visualization of historical events through maps. The project is designed by Dietmar Aumann, a German software developer who in his spare time developed Chronas History. The map can be accessed here.

This Will Revolutionize Education

What is history for?

Laura Sangha has written a blog post at “the many-headed monster” blog about doing history and thinking historically. “Last week, I delivered the introductory lecture for a second year undergraduate module, ‘Doing History’, and for various tedious reasons, I also recently spent some time reading, reflecting on and writing about why I consider history to be valuable. In the process, I conducted an entirely unscientific google trawl, trying to gauge what the general perception of the discipline was. I was struck by the fact that the popular or ‘commonsense’ perception of history encourages a rather limited assessment of its social and intellectual usefulness. What exactly do I mean?” Continue reading here.