University of Split Presents a Declaration on the Refugee Crisis

University of Split Presents a Declaration on the Refugee Crisis 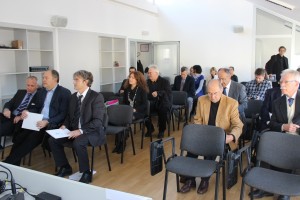 Some of the most eminent experts on European integrations and common EU policies, political scientists, jurists, anthropologists, historians and humanists from Croatia, Slovenia, Austria, France, Spain and Italy gathered on this occasion in Split  in order to open a scientifically based public discussion on the causes and consequences of the current humanitarian crisis affecting millions of people in the Middle East and the Northern Mediterranean, causing the unstoppable wave of war and economic migrants towards Europe.

Aware of possible far-reaching consequences for the future of Croatian society, Europe and the world, under the influence of current global economic and refugee crisis in scale of a “migration of peoples”,   the participants of the Conference, addressed the intellectual, political, cultural, Croatian, European and world public as well as the political institutions with decision power – by the common Declaration that was signed – in a hope that their thoughts can reach those who are still not taking the necessary measures to stop the causes of this immense crisis and the religious extremism it feeds.

Paris Peace Conference in the context of Catalonia

Consequences of the Paris Peace Conference

The Currents of 20th-Century Culture Motivated by the Political History